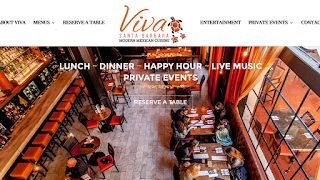 Brendan Searls is already well-known in Santa Barbara for his role in such establishments as Video Shmideo, Bogart’s, and Dargan’s, but these days, he is most excited about his latest challenge: Viva Modern Mexican Cuisine, located in the La Arcada spot previously occupied by Cielito. “This is truly a hidden gem — we could be in Barcelona, we could be in Prague, we could be in Mexico City,” said Searls, whose official opening weekend was in August during Fiesta. “Where else in this town can you sit and people watch, watch turtles, and not have to deal with traffic?”

Email ThisBlogThis!Share to TwitterShare to FacebookShare to Pinterest
Labels: a start and a nudge, Brendan Searls, Independent, Viva Modern Mexican