Besides the Tapped Out Tapas, A Fine Rioja Time 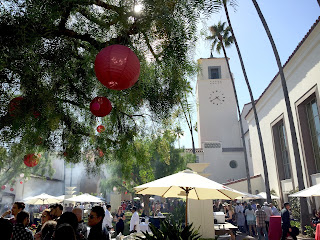 At the start of the recent Rioja Wine & Tapas Festival, held May 21 at the ever-gorgeous Union Station in Los Angeles, I'm agog at the huge tables of cheese--enough Manchego to drown in if you melted it--and goat cheese dusted with crumbled truffle chips and mussels with garbanzos and capers and Jamon Iberico getting spiraled into tender hammy sheets. Alas, after 20 minutes, the lines that form for all this goodness remind one this is taking place in a train station. Hurry up and wait, and maybe eat.

Perhaps write up the event as notes, as impressions made in what is necessarily a series of quick hits.

Note to self: if you ever put on a food and wine festival, integrate food and wine in the layout; if you could get tastes of wine while waiting in a food line, you'd be a much happier patient camper.

Palacios Remondo Placet Valtomelloso 2010 A Viura, Rioja's most prominent white grape (elsewhere it's called Macabeo, among other names--clearly the marketers didn't get in on the ground floor of the Rioja wine industry), this is big without going big big, aged in oak but still mighty fresh, a lovely peach/pear mix of a white (Chardonnay nodding to Roussanne?). It's not cheap ($45), but it is delish.

Fernandez de Pierola Reserva 2005: exactly the dusky/dusty notes you want in a Tempranillo. Cries out for food, but doesn't know how much you would cry if you waited on a line for food. Does not get food, but is good anyway.

In the courtyard, several pig halves grill away in the sun, the smoke from them infusing everything. So when a wine tastes like grilled meat, it's hard to know what your nose might be picking up, but it certainly pairs well--Tempranillo is nothing if not BBQ-friendly.

1500 people there, all the men in incredibly well-chosen shirts (does Spain bring out the haberdasher-lover?). Probably 1399 of them are in the paella line ahead of me, but I wait anyway, because paella. After 30 minutes, I get to the front of the line as the person two in front of me gets the last scrapings. It's 2:15 at a festival that runs until 5. Chef, not very polite, says come back in 30 minutes. I am not sure how someone at a catering style event doesn't have the next platter of food ready to go when one runs out. I am sure I'm not waiting for paella again.

Hello Graciano, no relation to Rocky (who, yes, was Graziano). One of Rioja's red varietals, but it's known for low yields and susceptibility to disease, so there isn't much of it. Found I liked Ijalba's 2011, deep red fruit and good spice notes and a pleasing SRP of $22. (It gets blended a lot, too.)

What chef/restaurant was that hidden amidst the meat-servers and their forbidding lines, serving the pickled mushrooms? One of my favorite plates of the day, so bracing and lifted with very fresh thyme.

At 3:40 tasting at the Bodegas Muriel table, and they are out of their two aged wines (a 2011 Reserva and a 2005 Gran Reserva). The Crianza 2012 is bright and yummy, finishing with spiced cherry. Can only imagine how good the older stuff is. No doubt others got to have it with paella.

DJ Lord, who has been part of Public Enemy in its later incarnations, brought the edginess of PE--near the end of the day one of his cuts repeated "motherf---er" over and over. So "Rioja, music to gangsta by," why not? Maybe he was pissed he didn't get paella too.


The final long-day roasted pigs, so good, especially the crackling--crisp and crunchy pig candy. Many people have gone home by now as pretty much all the wine is poured, all the food snacked down. But the nice server at the roast pig station, as I offer a very sincere thanks (I mean, who wants to wait at events like this?) gives me an extra piece or two, I'm sure.
Posted by George at 8:54 PM