It's My Saint's Day and I'll Blog If I Want To 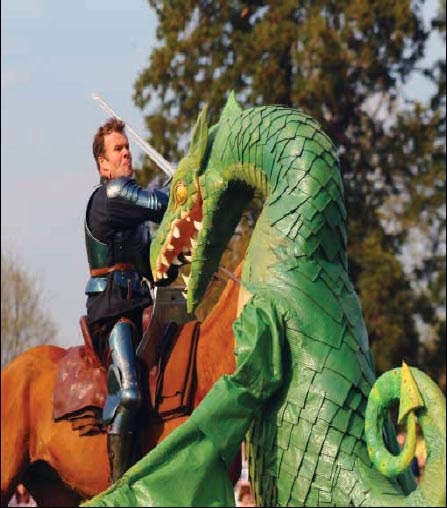 [An oldie but, I hope you think, goodie--posted this on an old blog back in 2008. A little something for my dad, also a George, who would have been 87 today. He had a silly sense of humor too.]

April 23rd is St. George's Day, and I feel a special affinity for my namesake, given we both had our sainthood removed (it's a very painful procedure when it's done when you're an adult, let me tell you). To help polish both our images, I did some research, and found out some wonderful things, like St. George isn't just the patron Saint of England, he also is the patron saint of the Knights of the Garter, and therefore not surprisingly, of those with syphilis. Therefore everyone in England has syphilis.

He also didn't slay the dragon all at once. Nope, he opted to first get a bit kinky and then showboat, dragging his dragon into town to show how saintly he was. Here's how the Middle Ages best-seller The Golden Legend put it:


Thus as they spake together the dragon appeared and came running to them, and S. George was upon his horse, and drew out his sword and garnished him with the sign of the cross, and rode hardily against the dragon which came towards him, and smote him with his spear and hurt him sore and threw him to the ground. And after said to the maid: Deliver to me your girdle, and bind it about the neck of the dragon and be not afeard.

When she had done so the dragon followed her as it had been a meek beast and debonair.

Which, of course, begs the question, is that a dragon in your girdle, are you just debonair? And it also is the precursor to those unbelievable moments in horror/action films, when a couple, in mortal peril from a hockey-mask wearing crazy, a Cloverdale Creature, or Al Pacino's hair, decides, "Let's stop running and get busy!" and then is slaughtered in flagrante delicto, but the scene meets the audience-approved nudity-violence quotient so everyone is happy. At least it's good to see the 21st century didn't make this shit up.

So, if you want to celebrate the day, there are many ways. First, you could ask a maiden to take off her girdle and wrap it around your dragon. Then email photos to the address at the bottom of this page. Second, you could just give money to people you know named George. Third, you could do the things English Heritage suggests. Many of these things have to do with eating and drinking. Yes, English food. So let's just skip to the drinking part, which England tends to be better at and keeps you from having something called Toad in the Hole (that has to be a euphemism, but I prefer dragon to toad, at least for my ego). Then make this:

I think I might celebrate with some St. George Whisky instead. From the good ole US of A. Since we need to work on the awful besmirchment to the name George that currently terrorizes our land.