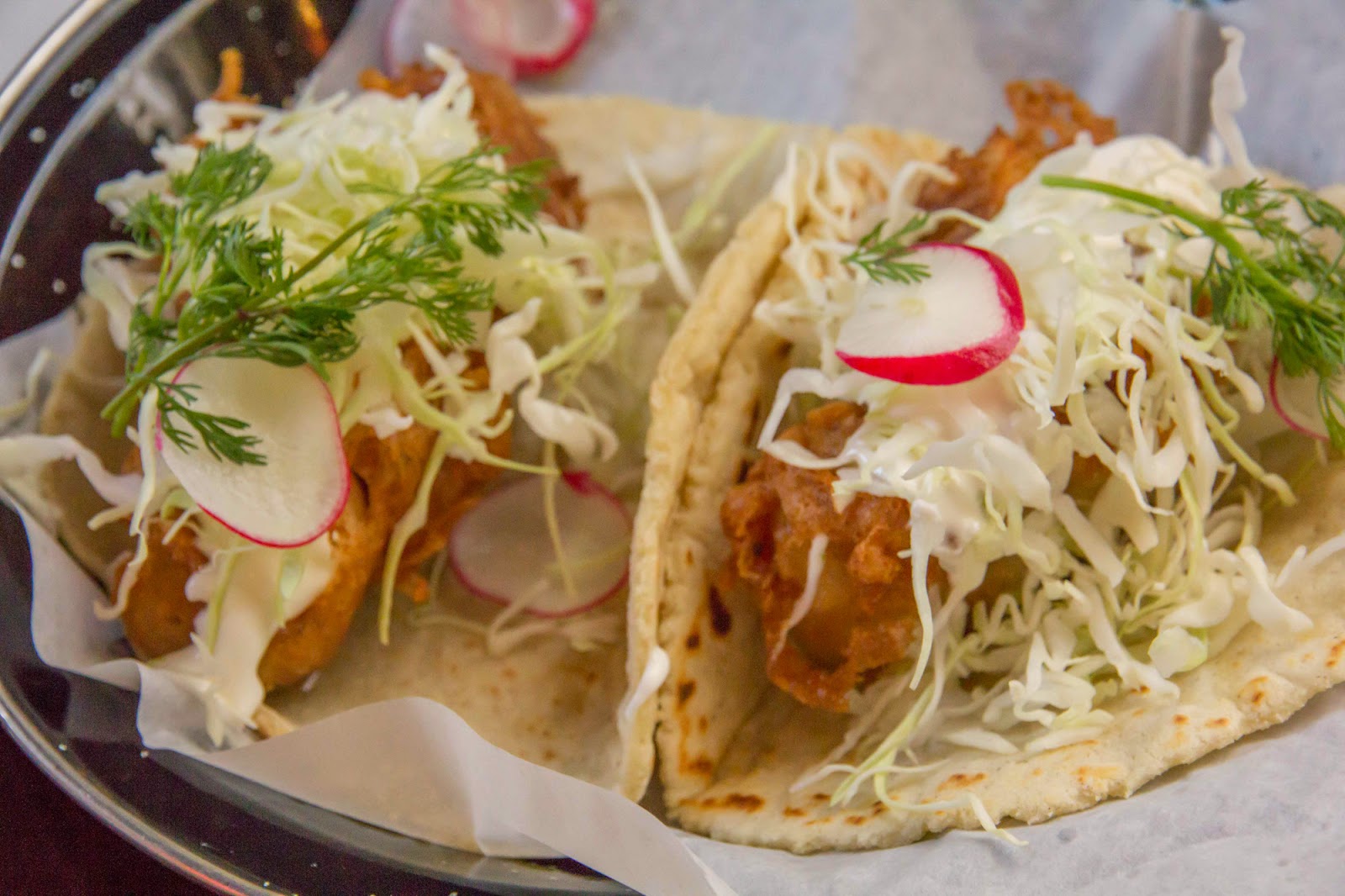 If tacos are "just" Mexican street food, then the ones you can get at Corazon Cucina are from a street paved with oro. Chef Ramon Velazquez's weekly Sunday pop-up at Three Pickles has folks wisely lining up to enjoy his incredible food that is terrifically tasty, precise and pretty. That photo above (both photos courtesy Forrest Mori) is of one of the best fish tacos you could ever have. The ling cod seems much fresher and full of flavor than the fish that usually gets fried up for tacos, and then that batter is crispy, light, not oily in the slightest**. There's a lime mayo crema that adds layers of flavor yet doesn't overpower. Velazquez's food is all about notes adding up to a sweet song, not a series of solos or a mishmash of stations playing too loudly from the radios of competing cars. And, as with all the tacos, the tortillas are hand-made and gorgeous, with a texture, a bit of heft. This is a dish that will ruin you for all other fish tacos.

There's plenty more, though, so be prepared to be ruined in many wonderful ways. For instance his clever take on street grilled corn-on-the-cob. His comes on those tortillas, with the exact amount of cotija you want to have cheese flavor but not merely cheese flavor, some mayonesa too for a bit more creaminess, some poblano for color contrast and a hint of heat, and then, of all things, crumbled chicharrones, adding an ever pleasing porkiness,* but even better, a bit of crunch, yet small enough not to take the focus away from the corn. (That's it below.) 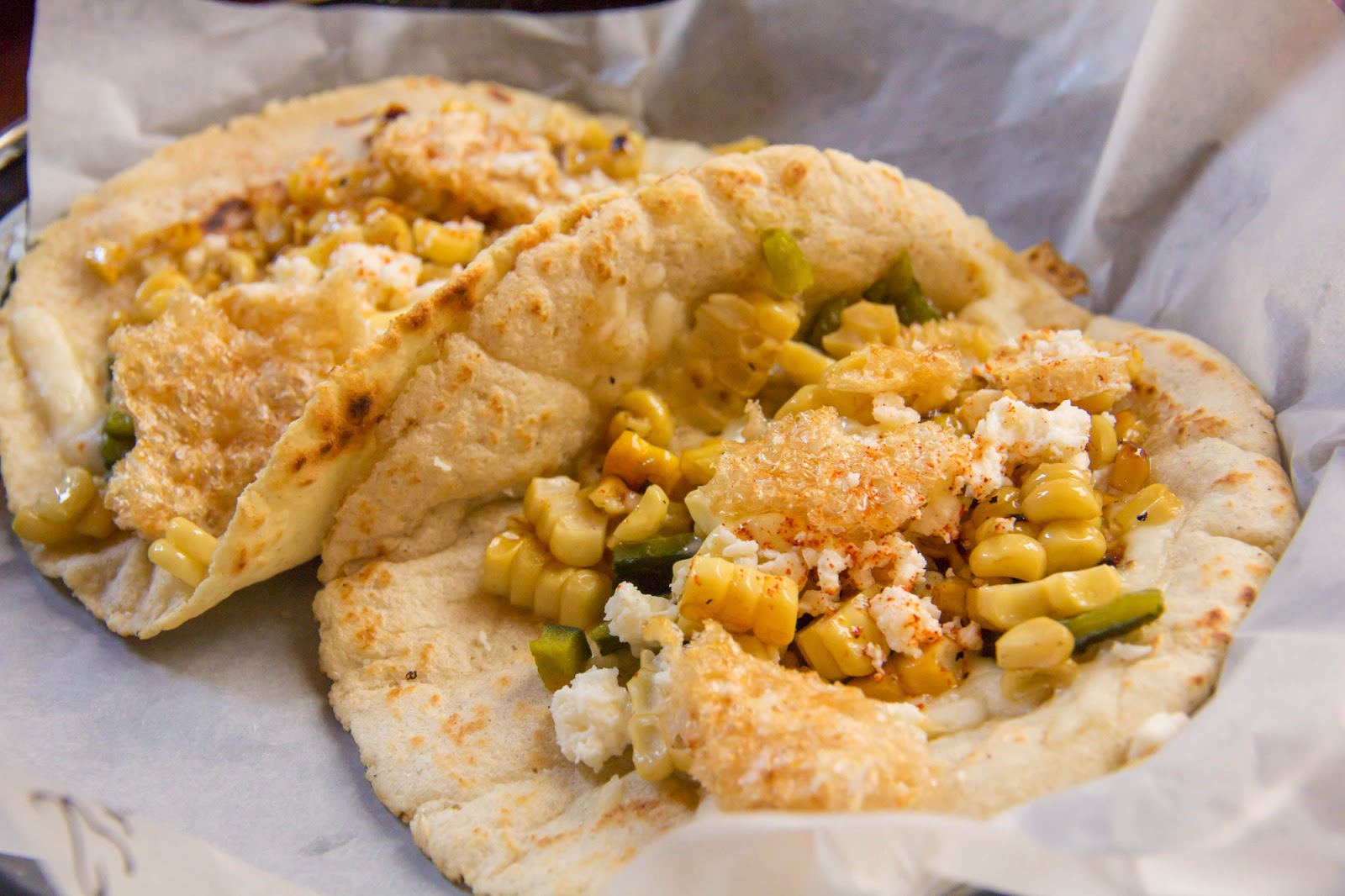 I could go on and on, but will stop after talking about one of the two ceviches of the day, La Lola. Velazquez was the opening chef at Cielito, and before that he'd spent years at Arigato, so he knows his seafood (and presentation). This one combined local red snapper, jicama, cucumber, avocado, tomatillo, serrano and yuzu (there's the Arigato influence) and then that comes atop a fried tortilla, as both an eating utensil, of sorts, and a crispy contrast. It all mixes into something almost shockingly fresh, partially from the citrus zing and partially because he buys primarily from local farmers market purveyors and local seafood, so that quality and freshness takes his dishes over the top.

The good news is the pop up is research and prep for his own spot in The Mill Project that's going up at the corner of Haley and Laguna, target date this summer. Until then, it makes sense to hit Corazon Cucina on Sundays religiously.

*There was a pork belly quesadilla, too, high and low meeting to make utter deliciousness. And again, the pork was cut in just the right size to function as taco topping. We're talking tacos engineered.

**I forgot to mention the batter is made with Captain Fatty's beer, too. So even that stays local and artisanal.
Posted by George at 9:27 PM