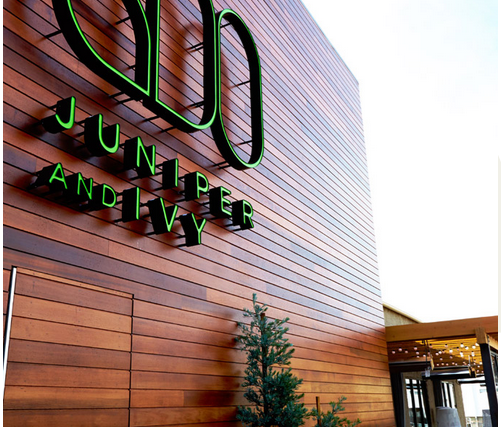 Like no doubt most of you, I don't want to be one of those people. For instance, when I do go to a regular supermarket (and just by making that distinction you know more about me than you need to), it's stunningly clear the checkout aisle magazines are not for me. I do not know who any of these people are, the ones on the covers we're all supposed to be so worried about (are they too skinny, fat, unloved, overloved, under-pregnant, a Duggar?). "Celebrity" culture makes little sense to me. OK, I'd probably get tongue-tied in the presence of an Elizabeth Warren or a Brian Eno, but again, there you go.

All this is prelude to say, the title celebrity chef doesn't mean too much to me, unless said chef can bring the bona fides. It might not hurt if he's endearingly self-doubting and it looks like he's used a trick of molecular gastronomy to make his hair stand up just so. Of course I'm talking about Richard Blais, winner of Top Chef: All Stars but probably more importantly not-winner of season 4. Everybody loves a redemption story, and the man came back and did it.

So when I heard he'd opened a place in San Diego, I wanted to go. It took a year, but we got to Juniper & Ivy recently and in short, he's running an amazing place, even if he wasn't in sight that night--a recent Eater interview suggested "Richard, Anthony [Wells, chef de cuisine] and I [Jon Sloan, executive chef] aren't on the line, we're coming up with the dishes and our staff's executing it."

That quote isn't precise, though--they're killing it. We hadn't had a meal so tasty, clever, and inventive in a long time, and we do a lot of good eating. It starts with the space, surprisingly large (seats 300), but spread out over levels and zones, so things end up intimate anyway. The staff is surprisingly young (especially the "should they be out on a school night?" hostesses) but well-trained and professional. At one point a guy next to us bumped his knife off his table and a server practically picked it up before it hit the floor. Even better, it wasn't that table's server; it's kind of a professional swarm that appears when needed, yet doesn't hover. People who can describe the menu, and make you want everything.

The menu is split up into Snacks, Raw, Pasta, Toast, Small Plates, Plates, and if you turn it upside-down, Last Chance (aka dessert). Wines are on the back, split by red and white, but also by Tried & True and Leap of Faith (and there's Special Acquisitions for the high rollers, and I assume some La Jollans love to splurge). Despite, wait, because we wanted everything, we decided to build a meal out of as many Small Plates or smaller as we could. And despite seeing our knife-dropping neighbors get amazing-looking (and soon clean, so probably amazing tasting) bigs of Alaskan halibut and beef shortrib, we didn't regret.

For example, consider the raw razor clams. I've never had a clam that tender, that melt in your mouth. And its seemingly odd accompaniment of oro blanco grapefruit (perfect citrus zip), raspberry (clever color and an acid on its way to sweet), and white Swiss chard (cooked but providing the plate's chew, too) all made for a series of angles totally complementary.

A toast on some serious, tasty bread might seem the most typical of dishes--isn't this just dressed up bruschetta?--was nonetheless dressed in unique style. Green tomatoes (a perfect promise of summer coming), burrata (in all its creamy goodness), and ice wine verjus (since just regular wine verjus is so passe already).

English pea captured winter into spring on a plate, as the peas where paired with some garbanzos, too, and mint (even when being inventive, classics are classics folks, and that's a sign for Blais form follows flavor), but also green hummus for depth. And then what's billed as feta snow, perhaps blasted with liquid nitro to get suitably cold, but a vivid way to concentrate the cheese and chill the entire plate.

Then there was the molcajete (yeah, things all came served unusual--lots of boards, etc.) with Orchard Morels. As if the mushrooms' own fabulous funk wasn't enough (perhaps there's dried morel in the sauce alongside the fresh? just a guess), the dish features "burnt bread," too, that makes you think maybe a kitchen disaster got rescued one night when someone over-toasted the toast. That char and crunch is everything in this dark dish, laced with some chevre and adorned with "onion glass"--think onion sliced membrane thin, then made into something like brittle. Sure, it looks cool, but it provides a sharp onion shock with a minimum of material.

Finally, my dear sweet pescatarian wife let me order one small all my own--foie gras and duck confit terrine. It was my first foie since the ban lifted, and while I had a soft spot for the luscious liver, I forgot how much I missed it until the first taste of this incredible dish hit my tongue. With the vein of confit running through it to add a bass note, it couldn't be better, especially when you scooped a bit of the quenelle of mustard ice cream with it. Yep, you heard right, and it wasn't just frozen mustard, this just-a-touch sweet custard. A dish to prove there is no too rich, if people make things right, and then give you some caraway rye bread to devour it all upon.

Sure, there were fine cocktails, and a Leap of Faith white 2013 Alain Graillot Crozes-Hermitage, because if you want to blend Marsanne and Roussanne well for me, I will say oui. (And then stop trying to say anything else in French, promise.) We didn't have room for any Last Chance, even after we had run in a 15K earlier that morning.

We left delighted, sated, provoked, pleased. That Blais really is a top chef.