Food fests are frequent and everywhere of late, popping up like mushrooms that we then have to ponder over--is this one delicious or sick-making? After all, the food fest, however well intentioned, can become a glorified excuse to cloak our gluttonous consumption in a hairshirt of educative moments extolling organic, local, sustainable goodness on our way to personal godliness. Or maybe the problem is that I eat and drink too much at these things--each little taste or micro-pour is just a mouthful or two, after all, so it's hard not to stop. But I do know that at a certain, often quite early, point when attending these that if the choice is to listen to a seminar/demo or go stuff my gullet, look out stomach, here it all comes.

A couple of weekends ago we had a feast of fests in the area, what with the SOL Food Festival right here in Santa Barbara and Sunset Magazine's Savor the Central Coast up in Santa Margarita, both in their second years. SOL was a huge success (so much so evidently the food ran out a bit early), pairing up producers and kitchens, hosting the wonderful Santa Barbara Independent Foodie Awards (go us), 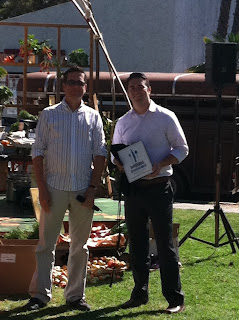 (Me and Branden Bidwell from Wine Cask at the Foodies)

letting a turkey roam the grounds (no, not me, a real bird). The word "hippie" has been taking a horribly beating of late, thanks to the right's lack of imagination and desire to lazily label the OWS crowd (plus, they're still fighting the '60s battles, hoping to keep youth, women, and people of color in their place--while us lefties are all about the future), but SOL captured hippie in its most optimistic sense. Maybe we all can just get along, and that can only start if we're all not hungry, and that means the land we eat from, too. The whole system has to stay healthy and fed. Thanks for stressing that, SOL.

As for Savor the Central Coast, that's a bit more upscale, but what do you expect from Sunset, which is sort of the Trader Joe's of lifestyle magazines--it's for people with some college-developed sense of taste, but who lack the money to be ostentatious about it (call them English majors). Having it at the Santa Margarita Ranch is a huge boon to begin, a lovely spot too many don't know about that seems old west in the best ways. I only had the chance to hit one day of what was billed The Main Event (no relation to the old Streisand movie), which had a bit of everything a food fest could do but on steroids (non-gmo ones, I'm sure). One slight cavil was a big part of the fest was Vons Land--nothing like corporate cash to turn a pretty standard supermarket chain into a paragon of local, organic, sustainable. No doubt these folks might have had some ideas about how sustainable Vons can be: 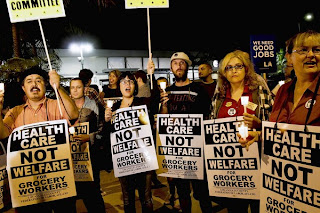 That said, there was more good eating than it was possible to do in a couple of hours of speed grazing, especially when the temptation was to stay at the Cracked Crab's booth and keep doing crab bisque shots. While it was supposedly a Central Coast fest, and even Ventura represented in the Pavilion of Travel Bureaus (ok, it had some other name, I'm sure, but you know what I beamingly mean, you've seen the permanently smiling sorts that shill at these things), but it was pretty Santa Barbara County light, beyond Bradley Ogden himself and Root 246 representing with a couple of delicious noshes.

Not that a whole bunch of SLO and Paso hurt--most of the best wineries were there, like L'Aventure and Tablas Creek--and then the food was as good or better. OK, make that perhaps nothing better than a lamb taco that Central City Market (in what I'm told is the godforsaken Santa Maria Mall) was serving up with lamb from Superior Farms Lamb. There should be more lamb in Mexican food, it seems.

We also took in one seminar, The Art of the Oyster with Sunset Food Editor Margo True. There was tons of information, but almost as much tantalization (and if that's not a word, it should be). Alongside the very informative and surprisingly self-deprecating (especially when it came to shucking) True was Neal Maloney from Morro Bay Oyster Company, who offered much fascinating info about teh bivalve that does so well slightly to our north. One of the best bits is Morro Bay's oysters are shaken not stirred (and, sure, Muscadet, Champagne, yeah yeah yeah, a gin martini makes for an elegant oyster pairing)--that is, as they farm the oysters, they shake the bags, which chips off the soft parts of the shells (better for cleaner eating later) and that shocks the little fellows a bit, too, so they deepen, making for a meatier oyster with more room for that lovely briny-sweet liquor. Then True whipped up some recipes, but we didn't get to taste any, which is sort of the lap dance of food. If anyone would like to have me over for barbecued oysters with chipotle glaze, I will be there before you finish reading this paragraph. 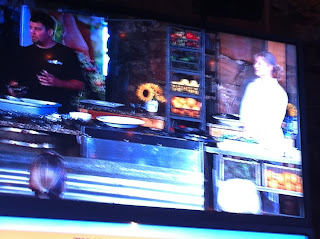 (These seminars were in the Santa Margarita lovely old barn/chapel, but then the videoed all of them, and often had the camera guys in the way, so you had to watch the video, even while the real action happened 12 feet away. It's an a-v world, isn't it.)

So was Savor worth savoring? Completely--an embarrassment of riches, so the less good things you could brush off with the next magnificent taste. But they might need to have some early seminars next year on the Art of Pacing Oneself.