A Chip Off the Old Choc

It's not perhaps the best karma to have to taste seven chocolate-related food items while staring across the street at the conscientious few conducting Occupy Santa Barbara. But that was the unfortunate geography of an event at which I was a judge Thursday night, as the Downtown Organization and First Thursday hosted a Chocolate Taste Off as a way to celebrate epicure.sb. Let them eat chocolate, I guess. Sorry protesters--promise I'm usually part of the 99%. But afterward, there's no doubt I occupied more of Santa Barbara then when I began.

I'm not going to run through all the entries, but the participants were Seagrass, Aldo's, Chocolate Opulence, Pierre La Fond, Wine Cask, Viva Oliva, and Adama. What people offered us was all over the board, too, if true to their businesses, but let's just admit that when somebody's baked you a whole dessert, a single raspberry in balsamic infused with three chocolates just can't compare. It's got a zen purity, sure, but this is about chocolate, and beyond spellcheck wanting to turn Opulence into Corpulence when I originally mistyped it above, it hits me now that "chocolate opulence" is pretty near redundant. Unless you're eating the wrong chocolate.

I am a bit chastened to add my winning choice came in second overall (I was one of four judges), but that might just prove that if you work the word doughnut into your dessert's name, I'm suddenly Homer Simpson. That's what Rosie Gerard at the Wine Cask did, serving up one of their regular menu items I've somehow so far resisted (mostly because I can't get past her amazing butterscotch pudding): chocolate & chevre doughnuts, crème anglaise, cappuccino ice cream. The goat cheese really works, so don't crinkle up your nose like an actual goat just stuck its horns through your monitor--it adds a creamier texture, cuts the chocolate's sweet a tad, gives it a bit of deeper dairiness. And the doughnuts were perfectly cooked all the way through, so there's no raw dough surprise or anything. Wonderful and elegant, especially with the cappuccino ice cream adding its coffee kick. 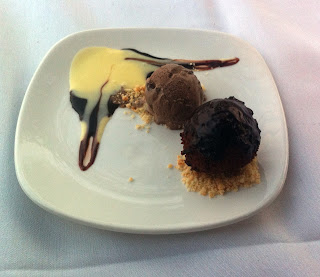 As for the winner, I had it as a close runner up, and would gladly eat one right now, especially since there might be time to have a second one before the day's end. Chef Nathan Heil from Pierre Lafond Wine Bistro prepared for us a salted caramel chocolate tart with Chantilly and caramel Oreo popcorn. Starting with the dessert's side...and, well, why don't more desserts have sides? If you're going to keep eating after a perfectly good dinner, there's no point in being a little pregnant, as the old joke goes. As for this popcorn, Heil could no doubt bag it and sell it on its own (his restaurant is close to the movie theaters, after all). Chocolate and caramel and popcorn and salt--that's four food groups. The tart itself beckons like any good tart, with its slip of salt, its crisp and flaky crust, its mix of luscious chocolate and caramel creaminess. I have no problem with it winning at all, beyond it's hard to beat a doughnut all gussied up. 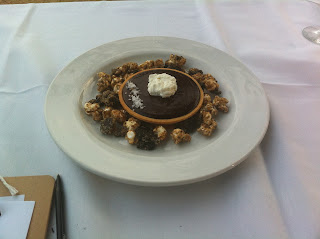