Our baby Batali experience at Otto wasn't our only attempt to sup supremely at Vegas' ample chef-ly teat (more tasty than any showgirl's, plus there's no rhinestones in the way and you don't get pummeled by a bouncer); we also skipped Picasso at the Bellagio and its at cheapest $113 per person, no liquor, tax, or tip prix fixe and instead visited Picasso chef Julian Serrano's new spot in the new Aria, named after his old self--Julian Serrano. (Note on that website that while Serrano is the star of two videos, the chef is Jose Picazo--no man is ever really in two kitchens at once.) Sure enough, it's a mid-priced bargain, for we feasted--shared 3 tapas, 1 paella for two, both had cappucinos, and then shared a churros and chocolate dessert, oh, plus a bottle of Vina Nora Albarino--for $134 pre-tip. Not cheap, but totally luxurious.

For, after all, two tickets to Spain are expensive. This wasn't Spain, but had a lively urban hip vibe, just off the humming Aria lobby and filled with bold colors that might seem either tacky or dated but somehow stayed firmly festive without going confetti-riotous. The service did that magic trick of being highly professional and still warm enough--eager to advise, when asked, willing to downsell on the wine list when our first request wasn't available. (Yes, in Vegas.) That Vina Nora was priced at $31, about a 100% markup, but for Vegas, a bargain that would leave Bugsy spinning in his grave, especially given it has a recent Wine Spectator 80th best wine of the year cache. (Do believe the hype, btw.)

As for the food, it was a wonderful mix of the straightforward/traditional--a Spanish tortilla of potato, egg, and onion that was a marvel of full flavor and simplicity--to a tempura Ahi sat alongside a magnificent fine dice avocado salad that was sort of reconstructed guacamole and then a wasabi foam that is the first foam I've eaten that both made sense and didn't seem like drool on the plate. 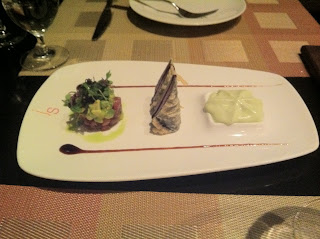 The avocado rooted the meal in a Spanish/Mexican tradition, the wasabi pulled the flavors to Asia, and then the super fresh Ahi tied it all in a rich fishy bow. A lovely dish. Even those tamari streaks made delicious sense for tempura brushing.

As for the paella, it was particularly striking as the one we ordered was solely fish-filled. My pescatarian partner often has to eschew paella with its traditional chicken and chorizo, but this one was fair game, as it was gameless, you might say. And completely scrumptious to the last grain crusted to the paella pan. Of course those slightly crunchy, crusty pieces are the best to score, as they attest to the transformations rice can go through to become something more than mush. Not that we did anything to avoid the seafood, a perfectly done melange of calamari, shrimp, mussels, monkish, all set off in some roasted vegetables and that saffron seductiveness that is the bright yellow hallmark of paella. 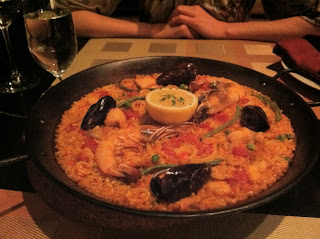 Finally, despite being full, I could not resist the temptation of churros and a chocolate that promised some chili heat. This photo should explain the brilliance of the dish... 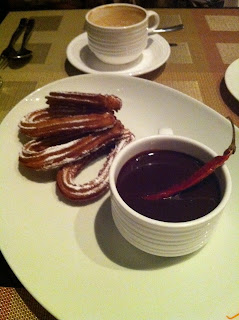 Yep, the chocolate comes with a chili in it, a clever hint as to the slow warmth that built from the luscious chocolate (of course a bunch of it got eaten just with a spoon) and then those looped churros, as you might be able to tell, are a bit thinner than most, meaning they're more crisp fried yumminess than most too. So while the dish starts with humble roots, it steps up without showing off or going to inedible places for art's sake.

Julian Serrano is a place for fun and pleasure, what every kind of hot spot could only wish to be.
Posted by George at 11:00 PM