Beds to Bet on in Nevada City 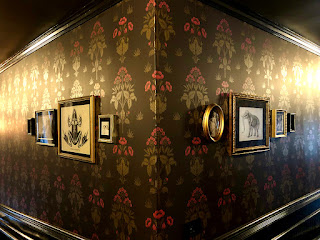 If, like me, you think that one of the best reasons to stay in a hotel is to live with bold and beautiful wallpaper that you don’t have the courage to risk at home, then you really need to stay at the National Exchange Hotel. The wonderful dark stuff above is in a hallway, where it's easier to risk a wilder print as no one stares at it for too long (I mean, what are you, some kind of hotel hallway creeper?), but it certainly sets the stage for all sorts of restored Victorian loveliness.
But not Victorian fustiness--note the prints on that wall, too, which give more of a science-y feel, a bit like you'd fallen into a study of someone who aspired to being part of a Society, as in "of Explorers," not society, as in grand. Much better than randomly decorating with garage sale purchased creepy dolls like you'd find in too many B'n'Bs to mention. Of course, one key with any old hotel restoration is to hint just enough that things could be haunted, but never by creepy dolls. You want it to be lovers who could never leave, they had such a great honeymoon, or something like that....
Such ghosts would be very at home in a bedroom like this one we recently got to stay in, part of a king suite that was plenty sweet enough to be suitable for royalty (those sheets are soft as butah, and sure, I see all the problems with that simile, but you get it). Also note while the wallpaper is still fun, it's not quite as dramatic as the kind in the hallway--after all, you spend some time in this room, especially as once you're on it, you never want to leave the bed. 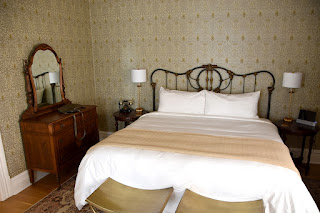 You will leave the bed, for many reasons, since you're in Nevada City, a cute as a button California Gold Rush hamlet (that's when buttons were still cute) quite happy to show off its history and natural beauty. We'll get to all that. But first you get to your sitting room, which invites plopping down with a good book--high ceilinged, well-lit, no wallpaper to distract you. 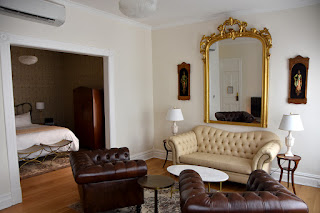 Note much of the furniture is antique, clearly hunted for and curated, so each room has its own charm. Also note--no TV. You better be able to make your own fun, or better yet, your own peace. The quiet of the place, despite being resurrected from the bones of a hotel that originally opened in 1856, is surprising. Neither crotchety creaks or your neighbors behind a century-thinned wall will disturb you. If you're desperate for the 21st century, there is wifi. There's a tablet next to the bed with Netflix fired up if you need it. 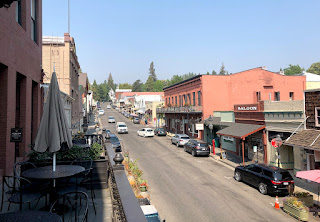 There's also a view of Broad Street, Nevada City's main drag (although this photo is taken from the second floor balcony that any guest has access to, off an inviting lounge--featuring the world's longest sectional couch--where each morning there's coffee and scones). Yep, it's a town with saloons, some vacant spaces because it's 2021 post?-pandemic America, art galleries, and some recognition of the Native Americans who came before those hungry for gold in the 1850s and those hungry for vacations in the 2000s.
There's even the Nevada Theatre, which might not look like much from the outside, but is California's oldest existing theater building. It opened a few months after Lincoln was assassinated, evidently not too worried about the scare John Wilkes Booth put into play-goers. Mark Twain performed there. (Yeah even then writers had to do tours to make some bank.) They're hoping to start performances again, too, COVID-willing. 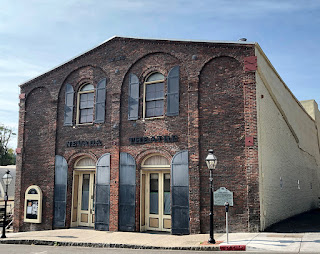 Alas, from what I can tell, one of the region's most notorious performers might never have performed at the Nevada Theatre as she was "retired" for the two years she lived in nearby Grass Valley. That's Lola Montez, who I first learned of from the Max Ophuls' film Lola Montès, which tell you more about obscure-film-loving-me than about Montes or Nevada City. She was a character, though, an infamous international lover--her affair with Ludwig I of Bavaria led to his abdication--and she danced the tarantella, complete with rubber spiders flying out of the folds of her frantically twirling dress. To honor her, the National Exchange Hotel has named its dining room after her.
And now is as good a time as any to mention another smart, successful, adventurous woman, Sherry Villanueva, managing partner and owner of Acme Hospitality, that people Santa Barbara will know for some of the town's best dining spots, from The Lark to Loquita to La Paloma. Acme is behind the restoration of the National (and of the also historic Holbrooke down the road a patch in Grass Valley), and that does mean the food program is going to be a focus, no mere afterthought.
And serious cocktails will be the first thought. Of course, anyone serious about cocktails knows to be playful, too, so you could order something like a Morning Glory, that comes with a special teabag infusion. 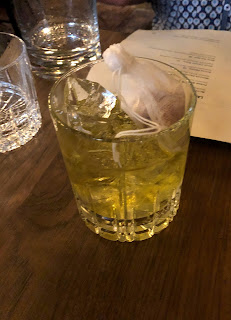 Or something a bit more direct, the Limelight, that I made the mistake of not taking notes about, and the bar menu isn't on the website. It was delicious, though, and I recall chartreuse was involved, so what could be wrong? 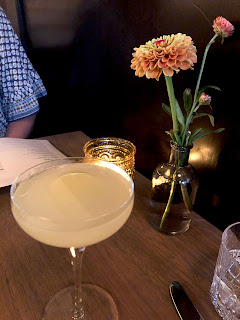 It's a gorgeous room, with nifty light fixtures and plenty of mirrors, so lots of reflected glow that makes you and you fellow diners even more beautiful than you are (and I have no doubts you are). Blue banquettes line the walls, both for comfort and sound absorption, always an issue in a building with so much exposed brick. And it's a perfect place to feast on frites, as we both did--Chryss had the moules frites and I had the steak frites. There was a lot more cream in that wine sauce than in some versions of the mussels, so it was pretty decadent, and also just pretty, with sea beans scattered atop adding crunch and even more salt. The steak was perfectly cooked to medium rare, and speaking of decadent, I would have bathed in the Bearnaise. Many of my fries certainly did. 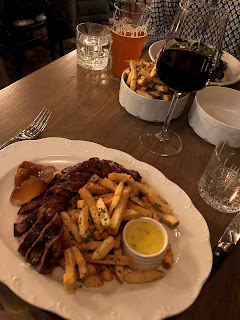 I do not mean to slight the precursors to our mains, either, a savory smoked salmon mousse with potatoes gaufrettes--a fancy name for chips that these delights earned--and a farmers market fresh salad of butter leaf lettuce, cherries, pickled onion, pepitas, and a healthy toss of Humboldt fog cheese (Northern California, represent!) Or our server, who paced the meal perfectly, offered wonderful advice, and really seemed glad to be there, as was true for all the staff in the hotel. (Side note: all through our two night stay we repeatedly witnessed staff training other staff--a lot of learning was going on, no doubt as the hotel has faced the same employment issues everyone in the service industry has faced of late.)
Oh, and the next night we returned to the bar to have more from that cocktail list, and while those drinks we consumed are lost to our gullets and history, they were delightful, too. Plus, here's what that bar looks like--spiffy time travel. 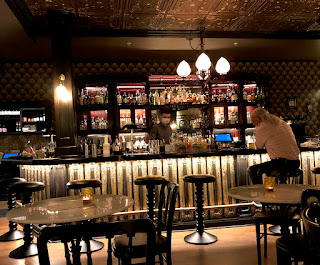 Of course, Nevada City itself is a trip back in time. At least two times, I should say, for while the predominant building style is Gold Rush meets Victorian chic, the town was re-infused with architectural goodness during the WPA, and that means there's a cool art moderne City Hall and this County Courthouse that sits atop one of the town's many hills, so is yet more imposing. 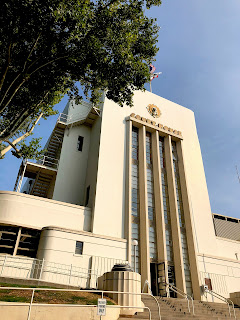 Meanwhile, all the old school brick places tend to be re-purposed for more modern uses. Take the old Assay Office, which now houses Harmony Books, a wonderful independent book store with a fine selection plus cool stuff like lots of tarot cards and jigsaw puzzles. It even had a book Chryss and I have poems in displayed in its window, California Fire & Water: A Climate Crisis Anthology, edited by local poet Molly Fisk. So we felt particularly welcome. 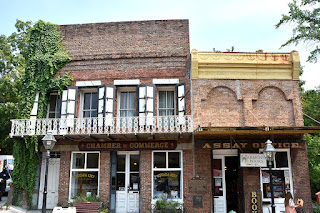 And indeed, there are other places to eat and drink in town, although we weren't there long enough to sample that many. We did dig the old time atmosphere at the Golden Era, with one of the prettiest tin ceilings I've ever seen, plus cool cocktails like the Repeat Offender, which made bourbon and mezcal sing together, with the help of some super syrup, old fashioned bitters, and a flamed orange disc for yet more smokiness, and the Bandito Escondido, an amped up margarita variation with mezcal, lemon and lime juice, Ancho Reyes liqueur, and hell-fire bitters--spicy fun. 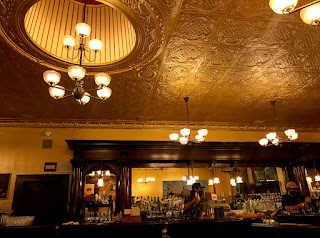 And there's a perfect place to eat and drink, Three Forks Bakery & Brewing, which left me with the pressing question--why aren't there a million bakery/beer brewers, or at the least one within walking distance of my house? Turns out we wound up there three times in one day, kicking off with scrumptious baked goods and lattes to start our morning, having a post-hike beer midday, and then returning for dinner, too, splitting a pizza and a salad that was all of late summer freshness. And yes, the beer is great, too. We can't say enough about the cosy, casual Three Forks. 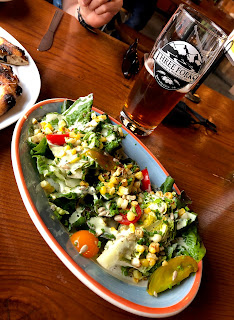 As for that hike (just one of many in the region), you can start right from the hotel, traipse through town (past the winery we never visited, the Odd Fellows Hall now an art gallery we didn't peruse), then into a neighborhood of houses (some with "we believe in science" posters in their yards, one with a giant InfoWars banner on its side--neighborhood gatherings must be fun!), and eventually you get to the Deer Creek Tribute Trail. The titular creek runs through a gouge of rock, and you even get to cross it on a very current suspension bridge that can still give one the willies as it shimmers many feet above the creek bed. Still, gorgeous (no pun intended). And about as easy a hike as one can take and get to see lots of actual nature. (It eventually loops you back into downtown.) 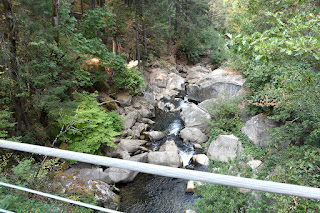 I hope I made it clear how wonderful the renovation of the hotel was, but if not, here's one more photo to convince you. Isn't that an eye-catching stairwell? The sense of detail and design is truly spectacular. 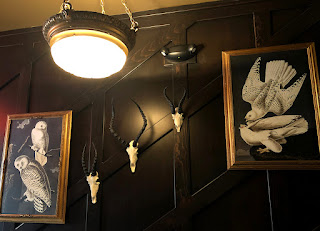 So let's not forget when and how it all began for this property that's been on the National Register of Historic Places since the Nixon presidency, so even its historic nature is historic. Not sure why pointing out this was the site of the first whipping post in the state is a plus, but maybe when the plaque went up someone really loved the Allman Brothers? I promise if you stay at the National Exchange Hotel, you will leave your blues at home. 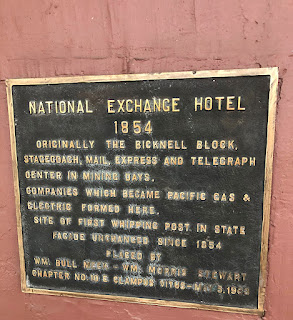