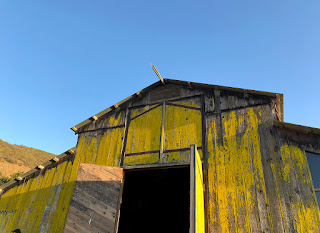 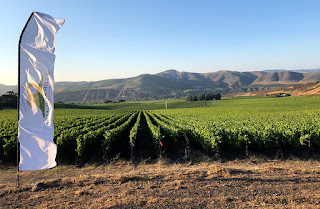 The Sta. Rita Hills Alliance threw itself a heck of a party this past weekend, as it's been 20 years SRH has been an official AVA--my how time flies when you're making great wine. But even better, it's 50 years since Richard Sanford and Michael Benedict planted the vineyard that bears their names, and fittingly, that's where the Wine and Fire festivities began on Thursday night.
I'm going to get a bit highfalutin here, so hang on, please. There's something holy about that mossy Sanford & Benedict barn. After all, it's not that often you get to stand where something began and by standing there totally feel history in all its effort and magic. Look at that wind whipping the banner in the photo, bringing the Pacific in thanks to Santa Barbara's famous transverse mountain ranges. That it's all beauteous scenery is just sort of bonus, but still. It makes me think of the Brancacci Chapel in Florence, where a young and too-soon-dead Masaccio figured out perspective and then painted some stunning murals that kick-started the Renaissance. Michelangelo would stand in front of these master paintings for hours, tracking to crack the new code. And we sort of know what he ended up doing.
Well, Richard Sanford, fortunately still with us, is our Masaccio, and since several generations of filmmakers have stood in Sanford & Benedict Vineyard and made some of the best Chardonnays and Pinot Noirs California has ever tasted. Many of them were being poured at Thursday's event. Bryan Babcock (more on him in a bit) poured a Pinot from the AVA's first vintage, for instance. Twenty years meant its fruit had faded, of course it was a bit brickish, but the acid life made it clear what a wine it once was. 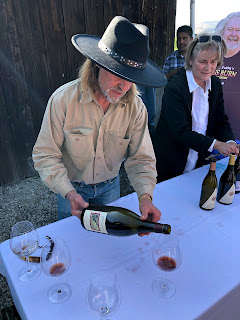 (And on a crucial side note, that's a cutout of Jim Clendenen, who's spirit infused the weekend. While his winery Au Bon Climat is in the Santa Maria Valley, as a force of nature, friend, teacher, there was no escaping his influence anywhere in the county, and yes, he did make S&B wines that are still sophisticated and delicious.)
Gray Hartley and Frank Ostini were both on hand, regaling the crowd with stories at the Hitching Post table, while taking us on a hop-scotching vertical journey through their S&B's, 2018, '16, '14, '01, 1999. As someone said, "Hey, we're drinking a wine from a different century." But it was all very much S&B, which in general features lip-smacking dark cherry to blackberry fruit, but then something special--a saline hint of that marine influence, some coastal herbal notes (no, not the recent coastal herb crop...), some floral notes. Always complex. An S&B Pinot, for me, is like when you meet someone you find intriguing and they only get more lovely the more you get to know them. 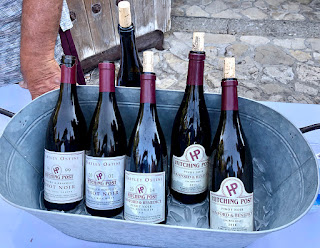 Again, the oldest vintages were interesting to taste as how often do you get that chance?, but I'd still argue the sweet spot for the wines was eight or nine years, as that HP 2014 and Richard Longoria's 2013 were simply singing arias of Pinot magnificence that night. And it wasn't just the "old" masters of SB winemaking that knocked it out of the park--we also delighted in the very first Dragonette S&B Pinot 2019, a wee but big baby that's worth waiting out, the delicious, light on its feet Liquid Farm S&B Pinot 2018, and two wines from Tyler, who poured both S&B Pinot and a supremely elegant S&B Chardonnay. 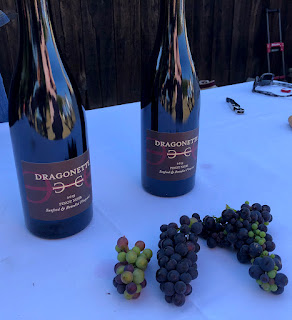 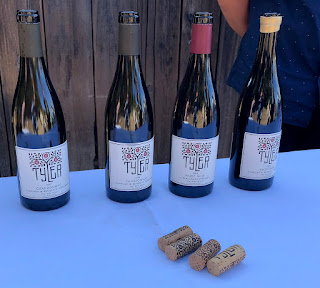 And Full of Life Flatbreads kept is happily munching away as we sipped, with their usually fine flatbreads, but also some killer summer-in-a-cup gazpacho and corn served as "ribs." They take a bandsaw to the cobs and then roast them in the pizza oven, serving them slathered with a garlicky aoli.
Friday we got to attend the sold-out Dinner Honoring the Pioneers of the SRH La Paulee, held at the Alma Rosa Winery. What a group of honorees that was--Wes Hagen was emcee, and he led a pre-dinner panel of  Bryan Babcock of Babcock Winery, Greg Brewer of Brewer-Clifton, Ken Brown of Ken Brown Wines,  Kathy Joseph of Fiddlehead Cellars, Rick Longoria of Longoria Wines, Bruce McGuire of Lafond Winery, Frank Ostini of Hitching Post, and Richard Sanford of Alma Rosa. Everyone reminisced abut Jim Clendenen to start, an emotional, but still often humorous beginning, for as Hagen said after, "We didn't hold a moment of silence because Jim would have hated that." Instead, Joseph recalled his kindness letting her make her second and third vintages at his production facility for free, Sanford charmingly called him a "rascal," and Ostini summed it up by saying, "He always offered us a challenge...Jim was as important as any winemaker in California."
The panel also concluded with the naming of the 2021 Vintner of the Year, Bryan Babcock. Presenting the award, Hagen recalled decades ago when Babcock pulled him aside and said, in contradiction to some press at the time, "This isn't the west side of the Santa Ynez Valley, it's the Santa Rita Hills." And certainly the evening was a proof of that. 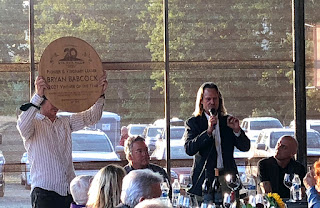 For, as you might know, a La Paulee dinner has its roots in Burgundy as a harvest celebration. The feast featured winemakers bringing their best wine both to impress and to say thank you to their crucial community. Things began with lots of sparkling from Flying Goat, Kessler-Haak, Pali, Sanford, and Spear, with Aaron Walker's Sparkling Rosé of Pinot Noir a definite highlight (plus, I got at least this picture!). 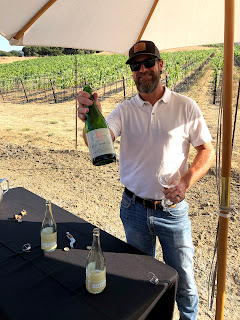 Then throughout the meal it sort of came down to what winemakers were sitting nearby as to what wines you got to enjoy. Luckily, we were next to Greg Brewer who shared a wealth of big bottle brilliance, from a 2011 S-D Chardonnay to a 2009 Ampelos Vineyard Pinot. Again, Brewer's wines proved a decade is a sweet spot for SRH wines, so if you have some stashed, drink up. (If you didn't hang on to any, that makes plenty of sense, too.) The honorees/pioneers were pretty good about making the rounds, too, so you got a sip of Babcock, a splash of Longoria, a taste of Fiddlehead, plus Kathy Joseph's story about how she beat rock promoters to the word Lollapalooza. Plus, many fun folks to dine with. (Side note: Wine Alliance, make it clearer you want guests to bring wine too, or drop that maybe they should. And no, I'm not just whining because I did bring a bottle and most other guests didn't.....)
And, of course, there was food, plenty of it, courtesy of the team from the Alisal Ranch led by chef Anthony Endy. Buffet feeding is always a bit tricky, but they pulled it off with aplomb and a lot of red oak--it was a true, classic Santa Maria style feast. But that said, it's always hard to compete with all the wine buzz at an event like this.
At that point I was celebrated out, but there were more events--focused tastings on aging wines, sparkling, and a grand tasting on Saturday at La Purisima Mission. It's been an amazing 20 years for this AVA, and one can only look forward to the next 200. To leave you with one last Sanford & Benedict image, here's a view out the barn itself, with all apologies to John Ford's The Searchers for the framing. 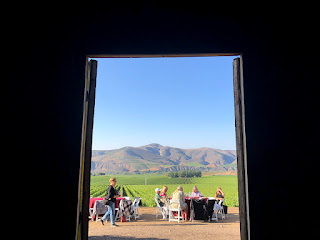