Growing Up in Public 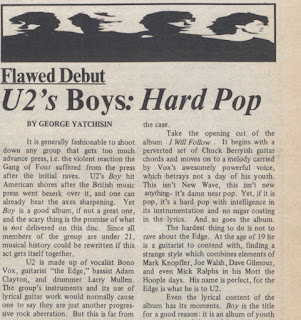 It’s 1981, a few months after U2 released their debut album Boy. Perhaps the editors at The News-Letter knew a good joke when they saw one, so they assigned a boy to review it. That’s how I, a freshman and not even 18 yet, got to pen a review that’s not quite as embarrassing as I feared it would be upon re-reading it 40 years later. “Since all members of this group are under 21, musical history could be rewritten if this act gets itself together,” I offered in a bet-hedging opening graph.
Of course, there’s that old line about all criticism being a form of autobiography. The News-Letter was certainly a place where one could get oneself together, and I’m pretty sure the first time I crossed the Gatehouse’s drawbridge I was terrified the crocodiles of my own lack of confidence swam beneath. Everyone inside seemed so much older, wiser and wittier, so I’d drop off my Smith-Corona-typed copy and scamper back to Gildersleeve, convinced the whiff of clove cigarettes stuck to my clothes. (I could be confusing the cigarette smoke with the air in the Hut — yes, in the early 1980s people still smoked everywhere.)
Care to read the rest then do so at the magazine celebrating the 135th anniversary of the Johns Hopkins News-Letter. I did not write there at its inception.... (It was cool to be part of this project!)
Posted by George at 7:31 PM