To Syrah, with Love 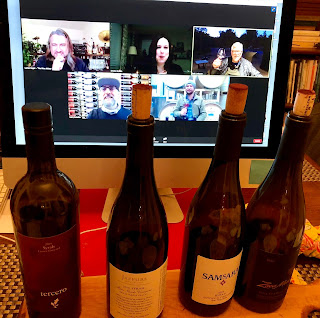 While the term Rhone Rangers always makes me think of winemakers astride giant wine bottles in Monument Valley--"Heigh ho, Nebuchadnezzar, away!"--the serious side of me never minds a ride with a few glasses of Syrah (or Grenache or Mourvedre or...). For as Santa Barbara legend Bob Lindquist put it, quoting Jim Fiolek, "Syrah delivers what Merlot promised."

All of that is a far too fanciful way to introduce a quick look at the Santa Barbara Rhone Rangers' recent event on February 4, a Syrah tasting that took viewers on a quick tour of the county. Moderated by Lamar Engel of The Wine Militia (sorry, but by now that's a name that has to change, no?), it featured a stellar winemaker cast with brilliant bottles to boot:

And the aforementioned - Bob Lindquist of Lindquist Wines with a barrel sample of his 2019 Syrah - Bien Nacido Vyd Z Block, Santa Maria Valley

The group was wise, entertaining, and sometimes geeky, even entering into a clone discussion of Syrah as if it were all finicky like Pinot Noir or something! (Although they seemed to agree that site trumps clone for making a good wine.) Whatever the topic, this free Zoom also made clear Santa Barbara winemaking stands tall (and often foot stomps hard).

And, perhaps, underlined one of the "problems" for creating a vinous Santa Barbara County identity. For this event featured four delicious syrahs (and we were lucky to taste three of them, all except for the barrel sample, and for that we swapped in a Jaffurs 2016 Syrah Bien Nacido Vineyard, which was a gorgeous monster, btw) that made clear site and winemaking will lead you to very different expressions of the same grape. The tercero, at just 12.9% ABV, lured you in to its loveliness, with a floral character the others didn't touch. It's the kind of wine that forces you to wake up and be aware, which is a good thing. The SAMsARA, with Brady's fondness for whole cluster, added a pleasing, despite the words I'm going to use, vegetal funk--a unique wine that made you keep sipping more. The Zaca Mesa, from the warmest location (and the SB vineyard that first planted Syrah way back when--we got a lot of history, too), had a fascinating depth and spice. And then Bob's wine--well, we don't know as we couldn't have any, but how could it not rock having been made by one of our county's founding wine fathers?

Even better, the SB Rhone Rangers will be doing more of these events, so go check out what they have to offer. And drink their wines--you won't get one expression of anything, but you will get a scrumptiously expressive everything.