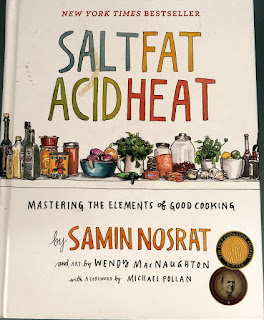 The James Beard Award–winning author and Netflix star Samin Nosrat needs no introduction. To call her thought- and taste-provoking. Salt Fat Acid Heat a cookbook is like saying Hamlet is a ghost story — except Shakespeare didn’t have such nifty infographics.

It’s our great fortune that she will be part of an UCSB Arts & Lectures virtual talk on Sunday, February 28, at 11 a.m. Moderated by Santa Barbara’s own restaurateur Sherry Villanueva, owner of The Lark, La Paloma, Loquita, and other hotspots, the chat also features Israeli-English author/chef Yotam Ottolenghi — remember when his book Plenty would be set dressing on television shows as a symbol that characters had hip taste?

Want to read the rest, then do so at the Independent's site.

And, yes, she's as warm and funny and self-deprecating and engaged as she seems on the Netflix show in real life, if a 35 minute phone interview is real life.