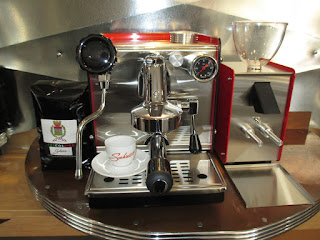 The year 1992 proved quite the moment for modern coffee. A modest company called Starbucks launched its IPO with a mere 140 coffee shops — today, it has 214 times (!) more outlets, not counting the dozens that opened as I wrote this article.

More critically for folks in search of a good cup, 1992 was the year that Salvatore Cisaria’s “brain started to roll and roll and roll, and I decided to do this.” “This” is making some of the most beautiful, completely handcrafted espresso machines in the world, which he’s been doing ever since, from Haley Street to the Santa Ynez Valley.

Want to read the rest then do so at the Independent's site.
Posted by George at 5:24 PM