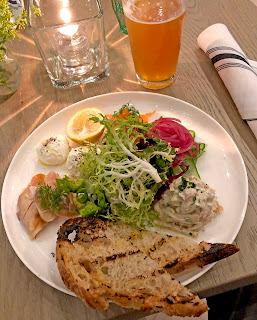 While clean, fresh, direct fast-casual might be pushing Italian out from restaurant opening ubiquity, that's not such a bad thing. After all, who doesn't want a lovely dish at the fairest price? So, Santa Barbara, let's welcome The Daisy to State Street. Chryss and I have only been once but the initial impressions are nothing but positive. The space is white and wood and warm, yet still very projectable to be whatever you want it to be. You order at the counter and the food gets delivered unto you, at a good speed (at least on the night we were there, when things were relatively slow).

What you see above is the house fish plate at $20, but if you want something with fish you won't regret eating later, you have to spend at least a twenty, don't you? It's smoked trout & apple salad, heavier on the trout than the fruit but that gives a bit of munch, hot & cold smoked salmon, which refers to how they are prepared as both are cold on the plate, labneh, cucumbers and pickled red onions and plenty of frisee, bread that's housemade and nicely grilled. It might seem like three ice cream scoops of fish is light, but you do feel full by the end, especially since all the preps pack flavor, redolent of salt or smoke and definitely things recently swimming. The labneh (maybe one of the hallmarks of fast-casual now, with its border-crossing twist and nod to the almighty Ottolenghi) is also a rich, lovely touch sitting at the Venn diagram center of yogurt, cream cheese, and sour cream.

The plate matches well with the Third Window hazy IPA, too. Plus it's good to see The Daisy pouring local brews.

Chryss really enjoyed the chickpea, chorizo and spinach stew with crostini that comes in a vegan, 'rizo-less model for a mere $15, pointing out how each component--the delightfully cooked down greens, the curried chick peas and the crunchy couscous that was much more than filler--became the favorite part of the dish after each mouthful.

We're looking forward to going back. (Oh, it's called The Daisy as that the chef Carmen Deforest's nickname--she runs the place with her husband Dominic Shiach.)