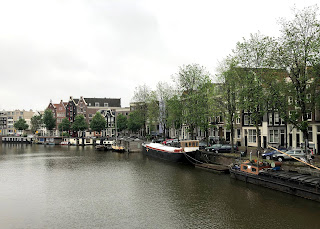 Pardon the obscure Elvis Costello allusion, especially since it's from a song called "New Amsterdam," (hey, there's a video for it, who knew?) when we were briefly in the old one. See, obligatory canal photo. I will spare you the one of many many bicycles (a whole parking garage of them!) and one of realizing we were in the red light district as the amount of unwashed vomit from the cobblestones increased.

We didn't get to do much this morning as our shuttle to the airport was heading out at about 10 am. We got up, ate breakfast, cleared our stateroom by 9 as required, and said farewell to Judy and Roger, who were doing the extension in Amsterdam and taxied off to their hotel. Some of us, after three weeks off, had to go back to work, though. That's in America.

Still, Chryss and I had to walk about a bit, didn't we? Peek our heads into one Gouda store? Worry the oddly slanted building fronts might slide into us on the sidewalk? (Clearly not Californians worried about the Big Shake.) 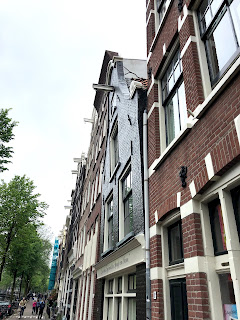 It was drizzly, though, so that made a town of water seem even damper. We did find a neighborhood of cute cafes and shops we wished we had time to dawdle in. We were impressed by lots of brick, especially the imposing Beurs van Berlage, once a stock exchange, and now a spot for conferences and snacking. 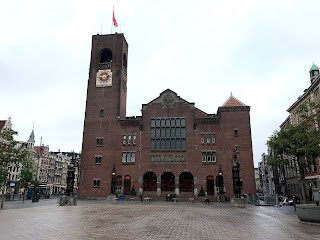 The damp meant I didn't drag the camera around, and I guess the idea it was all over saddened me enough I didn't really take phone photos, either. We did wish that Viking figured out a way you got some actually time in Amsterdam and didn't just say, "Hey, we're docked--now get on that shuttle!" It seems almost a cheat to pretend it's part of the cruise itinerary.

As for the airport, and a somewhat difficult two flights home, I won't bore you. Let's just say it's tricky when one person's Global Entry arrives on time and the other's doesn't, and then he gets stuck in a ridiculous customs line. We both made our connecting flight somehow, though, if a bit anxiously.

Instead, let's focus on a surprisingly good Bloody Mary at the Amsterdam airport. That's always nice, no? 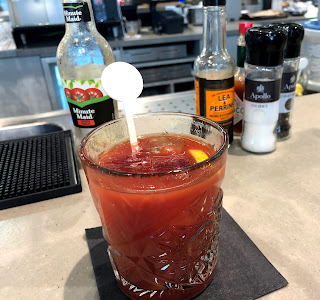 Or even better, the official Vali painting from our ship. What an artful run through Europe we had. Full, fast, and even with all these photos and posts, a bit of a dream. 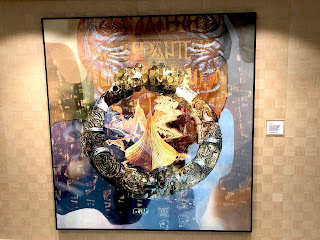 Go back to Day 17 of Ain't Europe Grand (Tour) with Chryss and George
Posted by George at 5:30 PM