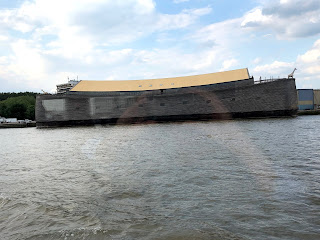 Ark, Who Sails There?

No, I had not had too much to drink early in the morning as we sailed from Germany--auf wiedersehen--to The Netherlands. For there really is a replica of the ark, not quite the full cubits as the "original," sitting there in the Rhine to indoctrinate folks into creationism. At least someone had some money to blow on it. Oddly, it fits 5,000 people, way more than the original crew. Did you recall Noah was five hundred years old when he became the father of Shemp, Moe, and Curly? Oh, I mean Shem, Ham and Japheth. I was pretty close without looking it up. I mean, why should I when most devout haven't read the book either?

There are other reasons to believe, like a blue day with puffy clouds and the ship's prow mist guard making magical reflections. 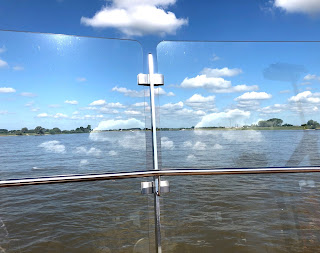 Or my wife, enjoying the sun and still cold. But she still rocks! 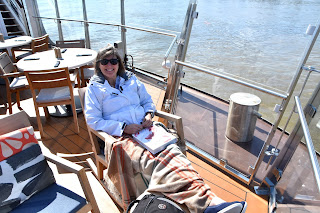 We are well past the land of castles at this point, with the Rhine from Cologne to eventually Amsterdam busy with other shipping and much of the shore looking a bit industrial. It's our last morning to sail under bridges, so I'm not going to miss the chance to shoot some photos of that. Always a bit thrilling-terrifying to consider the hundreds of cars zooming over us. 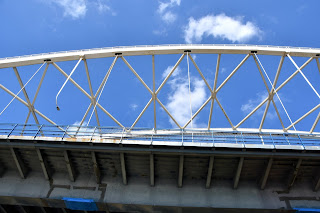 And trucks, too, of course. Go engineers! 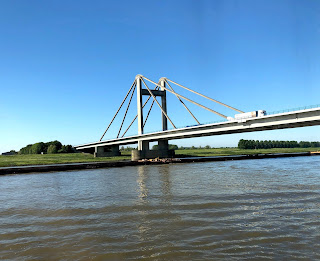 So this region is largely a park area known as De Biesbosch, and this building says that, but it really doesn't seem like nature park central. Alas, I didn't get this confusion cleared up on the ship or on the internets. Sorry. 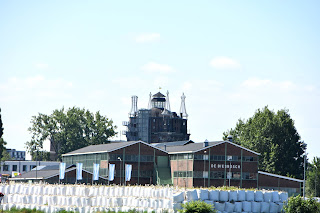 And soon, lo and behold, our first windmill! 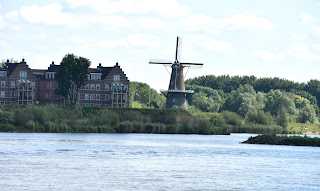 We were going to sort of back in to get to Kinderdijk, our afternoon stop, but here's what it looks like from around the way, with a water tower that's evidently for sale--some have been turned into hotels, so if you're interested in the hospitality industry.... 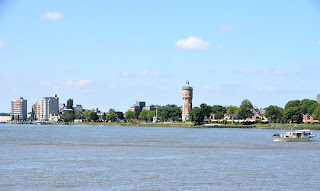 The largest concentration of windmills in The Netherlands is in the UNESCO World Heritage site that is Kinderdijk. Nineteen are still preserved-restored and driving a Don Quixote batty. (Cervantes reference, check!) They are amidst the Groene Hart (Green Heart, but you probably got that on your own), an extensive peat landscape where all the Dutch cities you've heard of are--Utrecht, Rotterdam, The Hague, and Amsterdam. And while it's become a tourist destination, that doesn't make it a tourist trap. Don't believe me, just look at this. 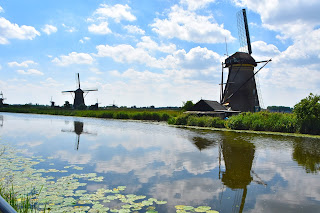 That's one of the best shots I got. Maybe ever. But the mix of water, tall grasses, blue skies, skittering clouds--it was something. You did have to watch where you walked, as it as also a paradise for water fowl, which like to poop all over human paths. I think the clay spells "restroom" in bird language. But the birds were also beautiful too. It was easy to keep getting different perspectives, but I promise not to overdo these selections, just give you a sense of it. Feel free to listen to the best version of "Windmills of Your Mind" as a soundtrack to the photos (Paul Motian, Bill Frisell, Petra Haden, Thomas Morgan). 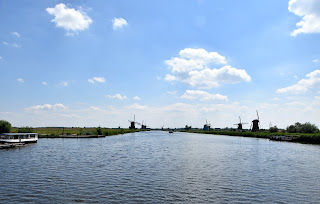 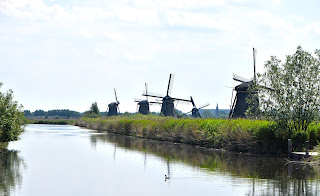 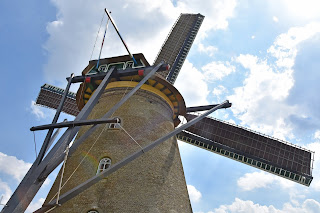 When we did our tour with the local guide, who had a super dry sense of humor (that's because her humor wore wooden shoes) 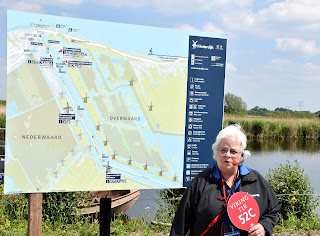 we even got to go inside one of the windmills. That's when things seemed too much full of tourists--cramped space, ladders of stairs more or less up and down the three stories. Amazing to think the one we visited had been home to a family of over 10 kids. I would think such a tiny home would be excellent birth control. 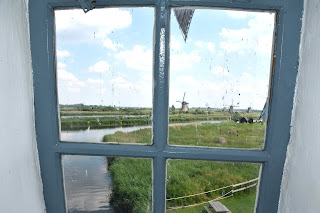 Oh, and then there was also , biking along amidst the tall grasses, unexplainable this. I so wish I knew this man's story, so hope he doesn't do it just to puzzle tourists like me, but has some greater deeper reason to perform his patrol. 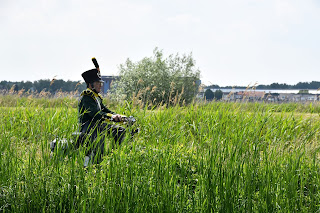 Some of the folks about the windmills weren't so exotic, if definitely more dear. 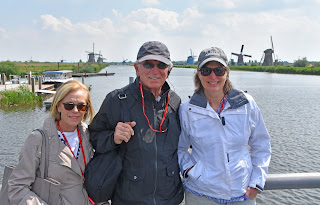 One Last Day of the Big Feed

Sure, we would get breakfast the next morning, but this day was it, the last full day of cruise stuffing. Again, we couldn't have been happier with Viking food, and given they tried so much to offer the cuisine from where you were, I felt less gypped not having to find a perfect spot in all our towns. Plus--easier and included!

So for lunch you get three photos, starting with our second to last soup. Viking really nails soups, so don't pass on them if you ever cruise with them. Here's a potage garbure, Bearn style, and who doesn't want to feel the Bearn? It's a pureed vegetable soup--recipes vary, but there will be beans and probably cabbage--and this one was swirled with saffron aioli and dotted with croutons and made you want to lick the bowl clean. 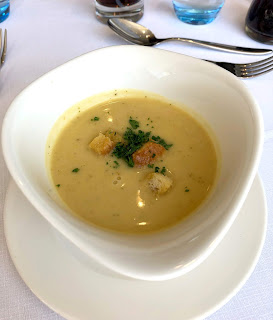 I guess since the soup came from France, the pasta could come from Liguria, torfie alla Genovese*, with pesto, potatoes (double the starch, double the fun!) and green beans.

*Note I did not make a Kitty Genovese joke as that's too obscure and has little to do with pasta and is just sad. 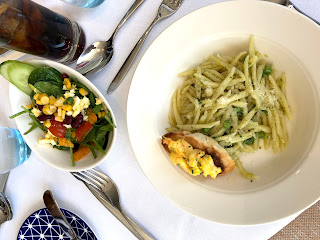 I promise we got off lunch desserts as soon as we got back to the States, but the Netherlands isn't a U.S. possession, so here's something easing us back into our homeland's good graces, apple crumb pie with caramel sauce and vanilla ice cream. Hide it under a large enough mint leaf and it's a salad. 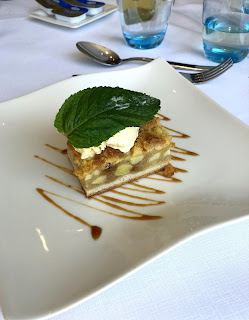 Dinner, of course, meant a returns to the regional specialties menu, but not for the appetizer as there was more soup--wild mushroom amped up with truffle cream--on the daily specials. Given wild mushroom soup was one of my few Slovak favorites that my mom made when I was a wee thing, this was both delicious and nostalgic--of my youth, of just a few weeks ago in Prague, which already seemed world's away. 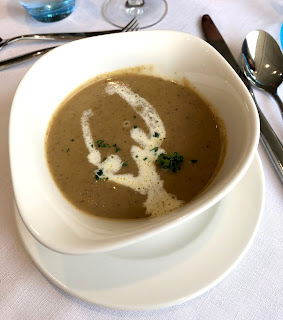 My main was the exotically named "roast pork." I mean, it's our last night, Viking! Step up your game and wow me with some German! Seriously, it was a perfect plate, with, of course, the legal requirement sides of sauerkraut and boiled potatoes. Cumin jus gave it a bit if a different fillip and helped keep it moist--it's so easy to dry out roast pork. 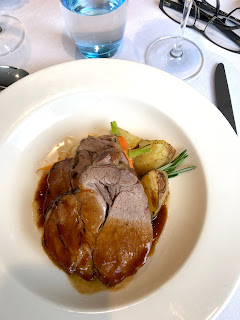 Chryss, prepping for the trip home and a land where all cuisines belong to us, had the Thai green vegetable curry. Again, Viking did a fine job making things work out for a pescatarian. 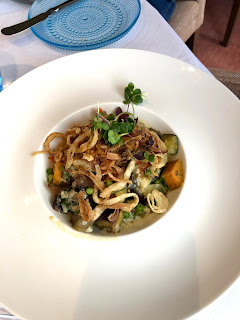 And I opted to keep the doctor away twice that day, with another apple dessert, mostly because who doesn't want the word "appelflappen" in one's mouth? The only thing more luscious where the apple fritters themselves--think of them as fired red tomatoes, but adorned with vanilla custard sauce. 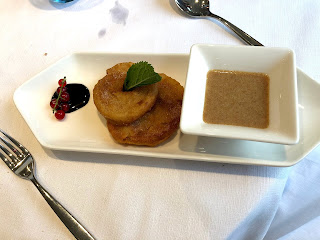 The First Night We Thought the Cruise Would End

It was hard to believe it was going to end, after being away for over two weeks, but here we were, with one last splendid sunset. 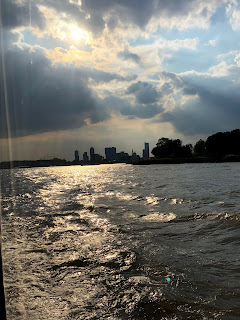 We had sailed legendary rivers, visited towns with centuries of history, ate and drank well, and even better met some fascinating new friends--here's the whole gang, with Steven and Carol (at left) and us at the last supper. 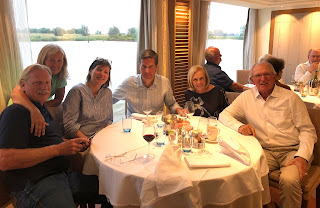 Chryss and I, of course, can't thank Roger and Judy enough. We cherished the trip, of course, but even more the chance to see the world with them. Thank you both.

There was, of course, one last drink treat, as the bar broke out some of the finest German brandy--of course there is such a thing, don't scoff. If you like brandy with a bit more of a bite, more caramel and oak, Asbach might be for you. On this night, it was spot on for me. 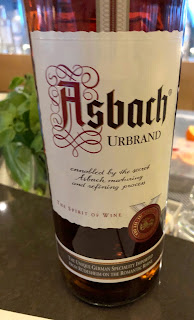 And so, don't ask for whom the Vali bell tolls, it tolls for our memorable adventure. I'll do a very short Amsterdam post (as we only were in the town for an hour--the airport much longer...). And then a wrap-up of highlights and what I hope will be a helpful index. But thanks for all your time on board this boat of a blog with me as it took me months to finish. 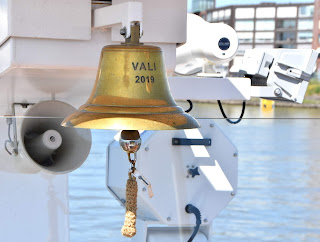 Go ahead to Day 18 of Ain't Europe Grand (Tour) with Chryss and George
Posted by George at 12:54 PM