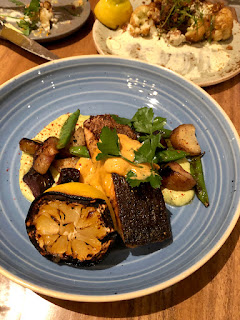 When locals lamented the closure of Solvang’s Bacon & Brine in August 2017, many didn’t know that Crystal DeLongpré — better known as Chef Pink — landed a new job just two months later. That’s because Chef Pink had so many changes to make at Root 246, the restaurant at Hotel Corque owned by Santa Ynez Band of Chumash Indians, her arrival there wasn’t announced until last fall.

“I don’t think of this place as being a hotel restaurant,” said Chef Pink recently, “but we had to prove ourselves when I started. Hey, we can do this kind of food in this environment, and people are going to embrace it.”

Want to read the rest then do so at the Independent's site.
Posted by George at 6:02 PM

Email ThisBlogThis!Share to TwitterShare to FacebookShare to Pinterest
Labels: a start and a nudge, Chef Pink, Independent, Root 246, solvang