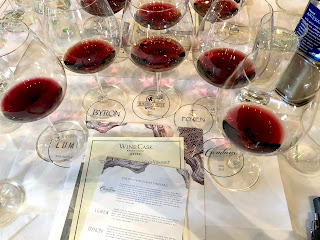 It's not every day I swirl and sniff a wine and almost cry. But it's not every day I get to taste a 1997 Foxen Julia's Vineyard, and suddenly get sensorily sucked back a couple of decades into my life when I was a much younger man just beginning to learn and love Santa Barbara wines. Julia's Vineyard was one of the first vineyard designates I can recall once I moved out to California in 1994 (beyond the venerable Bien Nacido, of course), and something about that lovely enveloping barbecue+spice+deep fruit nose erased years for me today at a Julia's Vineyard Seminar and Luncheon at the Wine Cask today as an estimable overture to World of Pinot Noir.

Of course it doesn't hurt to have Julia herself at the lunch tasting: The vineyard was planted in 1988 when she was 6 months old. (And yes, Katherine's Vineyard, famed for its chardonnay, is named after Julia's sister.) It's owned by Jackson Family Wines, the ninth-largest wine enterprise in the United States that owns 55 wineries globally (including Brewer-Clifton, Byron, Cambria, Nielson locally).

But despite all that BIG, they certainly care about small, and about relationships. For the event featured five wineries/winemakers who have been making beautiful juice from Julia's grapes for decades now: Cambria (as they get to play with the whole vineyard), plus Lumen/Lane Tanner, Byron, Hitching Post, and Foxen. MC master sommelier Michael Jordan (no relation to any other famous MJs) asserted that he not only "had a flag and a drum for the Santa Maria Valley," citing its 212 days of hang time for pinot grapes, more than anywhere in the world, but also, "if there was an American Grand Cru designation, Julia's would be it."

Surely there's nothing better than tasting through bottlings of this vineyard from 1996 to a 2018 Lumen barrel sample that Lane Tanner cleverly compared to tasting cookie dough, as we had to imagine what it would be like after it had time to "bake," so to speak. (It's going to be a scrumptious cookie.) As she said about Julia's in general, "There's always a smokiness...I always imagine that bar you go into late at night and there's a gorgeous woman at the end of the bar and you don't know if you should go there....."

Fanciful, sure, but it's a vineyard that leads to wine that leads to such heady thoughts, something to dream on. For as Jordan put it, "We like to over-complicate ans over-simplify at the same time, not just as sommeliers--it's the human condition." A wine as profound as one from Julia's let's you find a just right space, with flavors expansive yet precise, with structure exact and elastic. 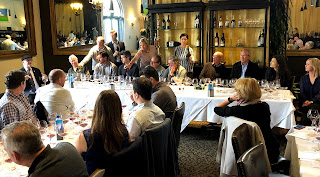