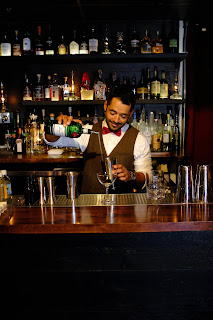 You can teach an old bar older tricks, it seems. Such is the case at Chaplin's Martini Bar (remember Charlie owned the Montecito Inn back in the day), in the spot of the recently and quickly deposed Frankland's Crab Co.--turns out town doesn't want to pay the admittedly spendy price for ridiculously fresh seafood, particularly a few blocks from the sea, especially when chef-owners Phillip Frankland Lee and Margarita Kallas-Lee then opened The Monarch next door. Lesson learned: you can drive your own self out of business with a second very hot spot.

But that doesn't mean Montecito didn't need a free-standing bar (non-directly restaurant connected, "management would prefer you eat and not just drink at the bar bar," that is), and now it's got one in Chaplin's. Plus, where do you go for a drink until midnight, when the sidewalks roll up at half past nine? You might remember the spot when it was the Montecito Cafe's bar, a bit bright, and there was popcorn and a blue cheese stuffed olive Blue Sapphire martini and a mini-menu with that trout salad everyone loved. A jewel box of a spot, with its curved wall of windows looking out at the porte cochere for the hotel and Coast Village Road, and you were, no doubt, meant to gaze out while those hoping to be as chic as you ogled in hoping to glimpse a celebrity or someone having a better time than they were.

Now that glass door is mirrored, though, so you can only see out. For the Chaplin's theme is speakeasy-dark, a hide-away for assignations and those wishing they had some. You know, romantic and borderline Deco-y, especially when the piped-in tunes feature Rudy Vallee and other '20s crooners. It's like a deep dark secret right there on CVR.

Fittingly the menu leans gin, but not of the bathtub variety. Still the cocktails call back to an earlier era, too, leading with one of my faves, the Corpse Reviver #2, a blended joy of gin, lemon juice, Pierre Ferrand Dry Curacao (think snooty Cointreau), and Kina l'Aero D'or (sort of absinthe-y). But, hey, Chaplin's, one of the drink's great kinks is you're supposed to serve it with a cherry, its red glowering at you sexily from the v-ed glass bottom. (Dr. Cocktail says so, not just me.)

But then there's the subtly honeyed Bee's Knees from the Ritz in Paris, and for those gin-averse, another one of my faves, the Vieux Carre from New Orleans (think a Sazerac jiggered up a notch), and heck, they even feature a Rusty Nail, and if anything is due for a comeback it's Drambuie. Classics, all.

What's more, Chaplin's some nights has one of my most cherished Santa Barbara servers working the bar, Jaime Rocha (not pictured above). He's worked at the Wine Cask, San Ysidro Ranch, bouchon, and where else but here at Chaplin's, which would be one of my favorite hangouts if I only could walk to it. Because it would be best if I then walked happily, woozily home.

Oh yeah, forget to mention in the original post: you can order the entire Monarch menu in Chaplin's. So go crazy!

*"His Favourite Pastime" is a 1914 American comedy film starring Charlie Chaplin as the drunken masher.
Posted by George at 5:15 PM