So it turns out if Eli Parker sets out to buy some art for his house, you could end up with a brilliant idea for a series of dinners. That's how The Bear and Star decided to kick-off Food for Thought, which they call "an artists series celebrating the connection between food and mind. The series invites modern innovators, from artists and musicians to technology inventors, to share their creative journey with the Los Olivos community." To begin the restaurant invited Grey Projects LA to visit, artists Tommy May and Gwen O'Neil, and set a lovely outdoor gallery behind the restaurant for us to dine in, May's and O'Neil's work surrounding us with blasts of color and composition. Then chef John Cox's plates echoed and aped the art--the bright orange hue from one canvas caught caught in the edible flower on one plate, etc.

May himself was amazed at how well Cox responded not only to their art, but to their conversations. For instance, May and O'Neil both find themselves artistically inspired by the landscapes that roll by them on long drives (such as the one from LA to SB), and one spot along that drive that always struck May is the stretched-out strawberry fields of Oxnard as one descends the Camarillo grade. Voila, the dessert, not to begin with the ending: Strawberry Fields, featuring a white chocolate cremeux (such a luscious texture and flavor), super-intense sundried strawberries, strawberry ice, what would be called strawberry leather if it weren't so ridiculously elegant (think more strawberry stained glass), pistachios, and anise hyssop. 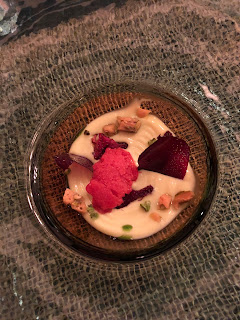 Cox repeatedly managed to capture mini-narratives with each exquisite plate of food, while never getting precious about it. Take the opening salvo, called Mussel Beds, that he said he wanted to echo the fascinating seaside mix of nature and the industrial (Cox lives on a boat in the Santa Barbara harbor, so he knows this scene very well). The mussel is smoked, therefore all the richer in flavor, and sat upon a black garlic puree whose scent practically overwhelmed when all the servers simultaneously lined up to  plate the dish for dinners (the one fine dining touch B&S never seems to give up, and a fine one it is, so much theater and democracy in one grand gesture). But while it hits the nose like an Ali right hook, it hits the palate as if I was punching you (I'm very gentle, you know). Then there's the spectacular loop of the squid ink bruschetta, delicate almost as lace yet flavorful yet sculptural. 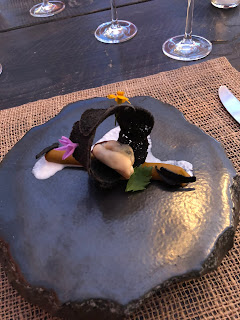 What a great pair with some J. Wilkes 2016 Pinot Blanc, a varietal that doesn't get enough credit, or enough drunk, but certainly had the elegance to match the powerful dish, and just enough petrol and saline to give it grip and add to the industrial edge. GM/somm Allison Crawford certainly has a lot of fun with matching these inventive dishes with the right pour (heck, it was a Jorge Ordonez Muscat de Alexandria for Strawberry Fields).

Course two was perhaps the most unusual, unless you eat more yucca in your house than we do. Chef Cox said it was about summer moving into autumn. It was called Yucca Blossoms, even if it was pretty much--emphasis on the pretty--just one, pickled from an earlier in the year harvest, sat like a cap atop the most decadent of duck egg flan. Alongside was a bit of blistered corn, some cilantro, and the dish's kicker, a poblano-bacon jam adding fatty umami and heat. Some Fess Parker Riesling, with its slight bit of residual sugar, cooled it down a bit, so your mouth was ready for the next scrumptious more. 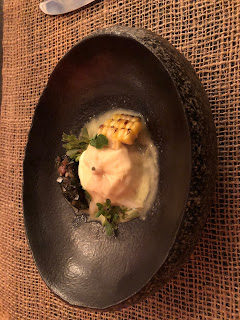 Next up, one of the most elegant From Turf to Surf ever, complete with a seaweed and shallot ash handprint that was meant to echo the patterns found in many of the Chumash cave paintings. Plus, it had a delicious flavor, too, as you would swab a bit of the seaweed-brined Parker Ranch wagyu (again, let's not get used to this--it's a restaurant that has a ranch that provides its own wagyu) across the char and pick up even more flavor, kind of like dusting the meat all on your own. That butter poached spot prawn couldn't have been more SB Harbor or any less delicious, and then those tomatoes--that green globe is one, too--two of them roasted and rich, but the third a enchanting slice semi-dried, and all the more intense. What else could you drink with this but pinot noir? They poured Fess Parker 2015 Bien Nacido Vineyard, and it was a Santa Barbara ur-wine--remember, before Sta. Rita Hills became the hot thing, it was Bien Nacido that at first defined our county's pinot. 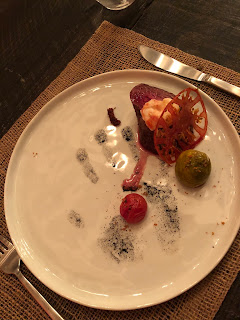 Before dessert there was a cheese course, somewhat cheekily called The Golden State given it featured French P'tit Basque (hey, we like to accept everyone in California). The cheese got a very local turn, though, as it got smoked with hay, and came to the table served that way, giving the table even more of the wonderful smell. Those crackers were special, too, made with red wine pomace (the stuff left after the juice goes on its way to become the good stuff), providing a special depth Carr's isn't going to match, say. And why not, some roasted apple, too, as it's fall and fruit and cheese like each other, especially in your belly. The pairing: an Aspall "Grand Cru" dry English cider, its bubbles kindly scrubbing your palate of rich cheese and prepping you for the next bite. 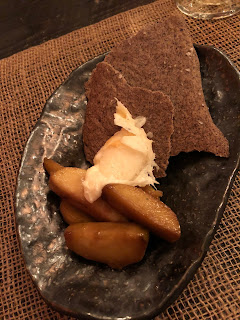 That was an evening of as thoughtful, and taste-full, food as there could be.
Posted by George at 12:54 PM