Tripping with George & Chryss--Off to a Half (Los Alamos, Salinas, Santa Rosa) 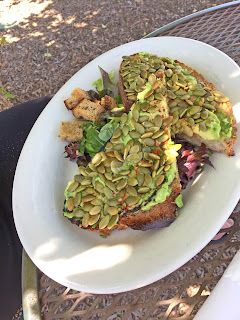 So there's a rule in our house for when we head north--we have to make it a certainty to be in Los Alamos for breakfast or lunch. If you don't know why, that means you've never been to Bob's Well Bread, and I pity you. I've waxed eloquent about this ridiculously good spot before in the Indy, as we gave Bob's a Foodie back in 2016 and I wrote: "Whatever’s in the soil that’s made Los Alamos our county’s hottest foodie mecca has its mother lode under the 1920s gas station Bob and Jane Oswaks turned into this inviting breakfast and lunch oasis in wine country. Killer croissant ​— ​you got it. Scrumptious scone ​— ​no problem. Egg-in-a-jar ​— ​poached perfection."

Given we were on our way up, up, up the state so we could run in the Avenue of the Giants Half Marathon a few weeks back, we had to hit Bob's, just in time for brunch. Chryss had to have the avocado toast, pictured above, as avocado is a perfect food and Bob's makes it perfecter. After all, anything with bread here has a leg up on any other slightly-sandwichy thing, but they also must test their proportions endlessly, for they always achieve a nirvana-like balance. And pepitas, of course, how better to give it all a tasty crunch.

I've been into ordering whatever the special is, as I take them at their word. This visit it was a torta al pastor, and here's hoping a picture is worth a thousand drools. 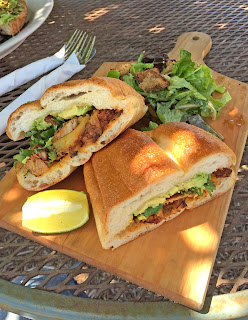 I particularly admire how whatever meat a sandwich features is always juicy and tender--they can even do that with a chicken sandwich. So with pork, no problem, especially with the grilled pineapple and avocado and sauce. And then the bolillo, both hearty and soft at once, a miracle of texture.

At some point I need to write a separate ode to Bob's Morning Roll, but just get one. It's like a croissant and a churro had a baby, but the croissant was Amal Clooney and the churro George Clooney. That gorgeously delicious.

Sure, this didn't stop us from visiting our favorite, and not just because it's our only, place to eat in Salinas, El Charrito. Since I last wrote about it in a 2012 post, they've removed the market part, so it's all food and a big spot for waiting on the very quick line. But it's hard to beat their tortillas, so whatever you put in them, whether just beans and rice for Chryss or chile verde for me, sings. While you eat it in your car--still no seating. Good thing they are smaller than the football-sized burritos popular in so many SB spots. 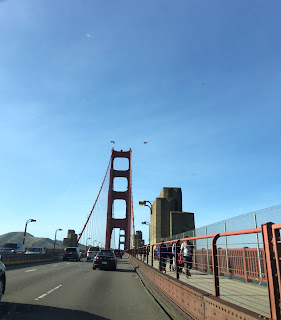 Given Eureka is a light year away from Santa Barbara--my, what a big state you have!--we spent the night in Santa Rosa. And who knew this place was there? 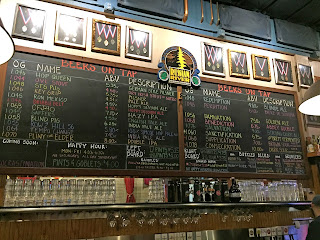 OK, I sure knew, so that's why we got an AirBnB a mile's walk away. Laid back and hopping, outside of trends yet followed by everyone who loves beer, Russian River Brewing is sui generis, and it's either very sad it's so far away, or a very good thing (George's liver waves hello, gets back to work). It's been a few years, so the  board had some new names; like everyone else Russian River is doing session beers, and Chryss liked the unfortunately named Dribble Belt so much she ordered it twice. (OK, it refers to part of a hop picking machine, but sounds so much more saliva-soaked.) How they get so much hop power into a beer that's just 4.5% ABV, I don't know. Speaking of trends, I had to order their hazy, CFJ-90, which delights, and then an IPA that I'd never heard of, Tempo Change (sort of a bridge beer between the NEIPA and the next...), and, of course, finished with a Pliny the Elder, because as they say, when in Rome, order the beer named after an actual Roman. It still is the ur-double IPA, the heavy hopping matching just enough malt that it just sings in harmony.

They do yummy pizzas, too, because beer bar. We had a Nu Deal that comes with pesto, mozzarella, spinach, caramelized onions and mushrooms--veggie with just enough going on to make it super-tasty.
Posted by George at 9:33 PM