Bullish on the Bear and Star 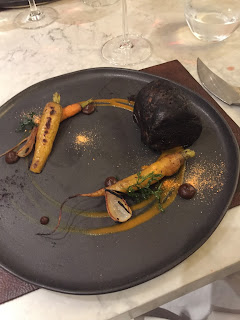 It takes courage to serve your charred shallot-coated filet on a black plate, or maybe it's secretly slimming--that's a big lovely hunk o' beef. But you're celebrating California if you're at the Fess Parker Wine Country Inn's Bear and Star, and the Golden State is all about two things: how about our heritage/how quick can we get to the future? Turns out you do both if you eat at a Chef's Table Dinner at Bear and Star. (Oh, and notice, no +, no &. See, tradition.)

On Labor Day we got to enjoy their roll out of what's going to become a regular chef's dinner, and if the debut is a true predictor, these events are going to become some of Santa Barbara's must-book culinary events. The evening opened with a nearly furious blizzard of so-called "snacks," including a dry-farmed tomato gazpacho I could have made a meal of (lovely shooter, though) and a sea cucumber chicharrone--that's lightly pickled, fried, and sure, a bit of a challenge food. The future is calling.

There were six courses to come, and for your sake and mine I won't run through each one, although no doubt each deserves its own mini-essay as the thought and technique on each is attention-worthy. The Bear and Star's chef John Cox teamed with guest chef (also from Monterey-wards--they've got some food culture happening there, I guess, or did, since all these fine people are cooking down SB-way now) Jeff Weiss, author of Charcurtería: The Soul of Spain, which makes sense as the theme for the evening was Spanish influence. All the wines, besides the Fesstivity bubbly to kick off and the Qupe 2006 Grenache, showing incredibly well with the beef, were from Spain, too.

That's Spain via the Parker Ranch and The Bear and Star Farm, where the majority of the  meats, fowl and produce came from. So think global, pick local. I have to admit I'm not sure of the provenance of the foie gras, lovingly hidden amidst some summer-perfect stone fruit and under a lozenge of honey meringue, about as delightful a sweet cap you could have on the earthy, unctuous liver.

Or that one ravioli the size of a coaster, such lovely lively pasta in its brown butter enriched to the nth degree with some black truffle, country ham, and acorn crumble.

Or that filet, redolent with the charred shallot--such an outrageously wise rub--yet cooked to a perfect medium rare beneath its black exterior. A bit of that with some of the black garlic paste dotted about the plate was a bit of meaty heaven.

Also be ready for machines, as the Chef's Room at Bear and Star is half library and half mad scientist's lab, books on one side, machinery silently a-whir on the other. One was busy separating/emulsifying the carrot puree that set the beef filet singing, another I want to call a speed distiller (sorry, precise science ain't my thing) that the staff claimed could age moonshine to bourbon in an evening (I'm doubtful, but curious). This night they opted to make a digestif for us in it, first passing around a nose-ful of aromatics that would go into making the drink (everything from herbs to pink peppercorns) which then got macerated with plum brandy as an alcoholic base. Think clear insta-amaro. It had a bit of an absinthe edge to it, which was only fitting given both Chryss and I had some of the most vivid dreams that evening we'd had in months.

What's more, the next Chef's Table Dinner is on the books: Tuesday, September 19,  Chef/Partner John Cox of The Bear and Star will welcome special guest Chef Julio Aguilera of El Destilado, Oaxaca, Mexico and Jason Cox of Cinco Sentidos agave spirits. You can just do the mezcal tasting, if you want, even.
Posted by George at 8:41 PM