Here's the danger about waiting six weeks to write about a dinner at a place that really truly is seasonal (yeah, yeah, everyone is seasonal now, which is why people are serving tomatoes like it's summer already)--going through PYT's current menu, only two things we had back in April are still on the menu and one is our dessert. So that's going to make this write-up a bit more impressionistic and less specific, but no less praise-full. For what Josef Centeno is doing at PYT (which might stand for Pretty Young Turnip), the mostly vegetarian restaurant he's carved out of the charming old school, mosaic-tiled Ledlow space downtown, is a delight. It's the kind of place you want to bring those who don't think vegetarian food is compelling; they will leave feeling both full, and very differently about the essential need for animal protein on a plate. 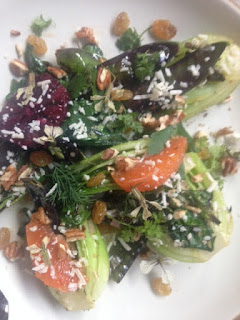 OK, so that's a salad. The "greens' in this case are bok choy, grilled a bit, but then you can see how much other flavor joins them, from sultanas to what was called a snow of cheese. Fresh herbs. So much life in one dish. But with the bit of cooking on the bok choy, just enough sense of the seasons changing, too, spring warming out of winter. 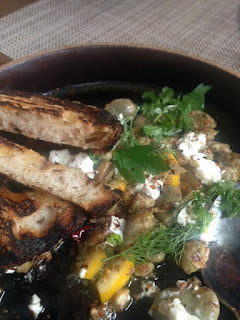 This plate might be even harder to read as a photo, but it's favas seriously seasoned and aside feta and dill and bread to scoop it all up, a sort of nod to hummus that's not so much deconstructed as un-constructed, so heartier, each element announcing itself to you as you ate it. You would be a fool not to welcome it back. 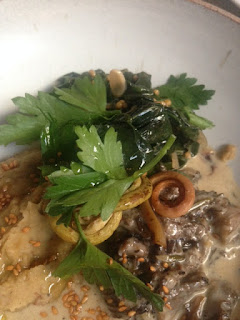 Then this, called morels and ramps. We sort of had to get it, given how you can't really buy either as just ingredients in Santa Barbara (why are we such a touch town in which to find interesting mushrooms?). If I recall correctly, there's sesame seed in there--he seems to like to dribble some seeds atop things to bring flavors together--and again, this truly sang spring. 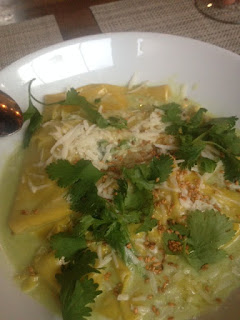 And those seeds are back for the hand-torn pasta, an exercise in the joys of texture. There's nothing quite like the pull-chew of "live" pasta, and this dish had that down. Centeno also finds wonderfully complementary matches from across the Pacific rim to make unusual, memorable flavors--here it's shisito peppers giving the cream a bit of zip, but then there's yuzu, and cilantro, and brown butter, and mint. Bright, brighter, brightest. Talk about figuring out how to make pasta seem not in the least bit a heavy dish. 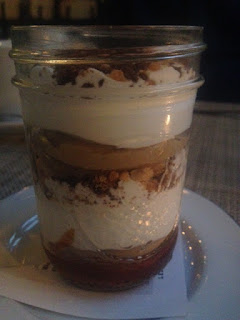 That's dessert--peanut pudding, whipped cream, salty caramel. Perhaps the one less pleasing dish of the night, but then again, it didn't have any veggies. (Plus it could have more salty caramel, because what couldn't.)

Still, we'd go back in a sec to see what's the best stuff just fresh from the fields meant to taste even more like its own loveliness.
Posted by George at 10:27 PM