Why Santa Barbara Might Need to Blush about Its Roses 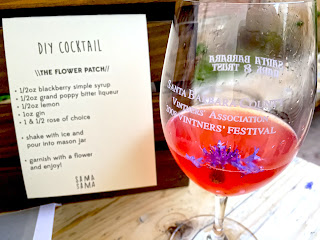 To claim you don’t like rosé is about the same as saying you don’t like cheese or people. While Limburger or a crowded bus might be too stinky for you, have you tried a nutty-gouda delight like Ewephoria or met Pope Francis? While these particular examples might not float your cheese or human character boat, I promise there’s a rosé out there that will.

Especially if you’re drinking Santa Barbara County rosé. That point became transparently clear at a recent Santa Barbara Vintners Road Trip to Santa Barbara itself, the first after the group had such success bringing the brand to Los Angeles recently. On a relatively balmy day on Sama Sama’s back patio, 15 area producers poured a rosé or three and made clear, as usual, for variety this region can’t be beat.

Want to read the rest then do so at the Santa Barbara Vintners blog.

(P.S. that cocktail in the photo was from the rosé dinner later that evening at Sama Sama)
Posted by George at 5:30 PM