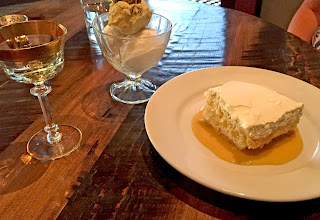 It’s entirely possible the best dessert in town is the most deceptively simple. Tres leches cake has gone from a mysterious origin — practically every Latin American country claims its creation, and then there’s an ugly possibility a condensed milk company came up with it to sell its product — to a blanded-out cliché. Chef Justin West rescues it from both its murky and over-familiar history by paring it down to its core delights.

Want to read the rest then do so at the Independent's site.
Posted by George at 5:30 PM