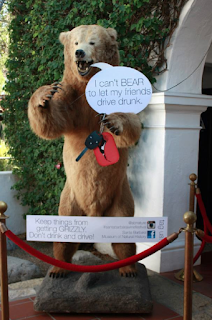 I get bored just posting photos of food and wine, so I figure this image helps capture the sense of fun that awaits at the Santa Barbara Wine Festival happening June 25 from 2-5 pm at the Santa Barbara Museum of Natural History. Of course, we're talking an event that had its first run in 1983 (same year GPS was released to the general public--how did anyone get anywhere back then?). This is far from my first run writing about the festival, as it's one of my favorites, an idyllic mix of the best wine and food in an oak grove setting that can't be beat but can beat the heat. (You can go read previous stories here, if you want.)

There's more, though, as I learned by talking to the ever-delightful Meridith Moore, events manager at SBMNH. "Since it's the hundredth anniversary of the museum--which is a huge time here in Santa Barbara if not a long time in the rest of the world--we will have one-hundred booths of food and wine," she informs. The festival also has a rep for the actual winemakers showing up to pour, and that tradition isn't ending soon. In fact, in the newly created VIP area, those who arrive for early entrance will have wine poured by Paul Lato (his first time at the festival) and Morgan Clendenen (pouring her Cold Heaven). With upscale munchies by C'est Cheese and Chef Pete Clement, it's going to be quite the spot...sorry that those tickets are already sold out.

The other great innovation for the 100th anniversary will be a Sparkling Way featuring many of the county's best bubbles--think Flying Goat, Fiddlehead, Alma Rosa. What's more, this spot will be home to food by Industrial Eats, too. Sure beats a ride to Buellton.

And then there's the ever-popular Cork Pull raffle: for $30 a pop (cash only!), you get a cork, it has a number, the number has a prize of at least $50 value. I've scored a dinner for two at Barbareno pulling a cork, just saying.

Finally, the big news that will be no surprise to anyone used to attending: the day after this year's event, it gets a new trademarked name that captures its tasty balance--The Santa Barbara Wine & Food Festival.
Posted by George at 9:56 PM