A Tip of the Cup to Cusp 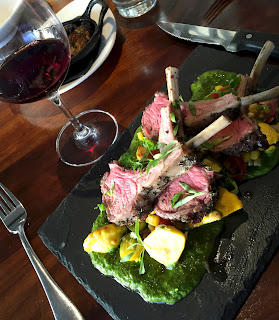 It would be easy to think that Cusp Dining & Drinks starts off with two strikes. First, it's atop the Hotel La Jolla, and there's that old rule: the better the restaurant's view, the less good they figure the food needs to be. Given this view is La Jolla in all it's San Diegan splendor--it almost looks a bit wild out there!--and, if you time it right, that big ole ball of sun dumping into the Pacific at dinner, they could probably serve you sawdust burgers and you'd still leave with a smile on your face. Second, it's a hotel restaurant, and too often they cater to a captive audience they assume doesn't want anything too adventurous; after all their lazy diners can't even bother to leave the hotel for a meal. (C'mon people, see the sights!) At least they miss the easy third strike and avoided the curse of cutesy alliteration and didn't name the place Cusp Cuisine and Cocktails.

The good news is that if anybody can hit it out of the park when behinds in the count, it's Cusp. (How un-Padre of them!) (Sorry, cheap shot, I know.) That began with Dennis, our very professional server. Just enough smile, just enough polish, just enough knowledge, just perfect timing. That kind of thing. Gracious.

Well, actually, the space itself probably came before even Dennis. The eleventh floor as you descend to La Jolla shores in a room of all windows and a great grate on the opposite wall, and banquets set a bit higher, and music there but not THERE--it's a very pleasing place to be, a tad retro but also a bit timeless, because what else is the best retro but forever?

To save both my time and yours, I'm not going to do a blow-by-blow, so will, alas, not lavish enticing descriptors on the Oaxacan Sunset cocktail (a Mezcal-starring reinvention of the Margarita), or on the appetizers that appetized (a fried calamari that avoided cliche by laying aside a romesco sauce) or the dessert (apple fritter that was more a donut stuffed with a still pretty crunchy apple round--very clever).

No, I want to talk lamb, which you can see above. Usually the "serve it on something other than a plate" bit seems precious to me, but the black slate really worked, especially since that salsa verde was so blissfully thick. The meat was juicy yet coated with a good crunch and redolent with fresh rosemary and tarragon and lots of black pepper. The vegetables were more than an afterthought, a sprinkle of grilled corn to make it all the more summer (the seasonal menu had just kicked in the weekend we were there) and the squash a fine counter-point in flavor and texture. And if you're wondering, I sure did use my fingers to get each last nibble to the bone.