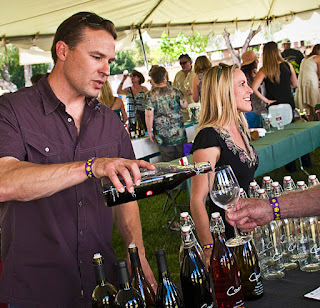 When the Santa Barbara Vintners call their April 23rd event a Grand Tasting, it’s far from marketing puffery. After all, River View Park in Buellton will contain over 100 wineries and 30 food purveyors, more than even the most ambitious, bottomless festival-goer could ever partake in. That said, a 3 to 1 ratio of wine to food tastes should do a pretty good job of giving anyone a lay of the Santa Barbara bounty and keep the person more sober than not (remember, spit! or at least sip-sip-dump! or share with a partner!).

That food runs the gamut, from Cowboy Ike’s Wine Jelly to the Hitching Post II, but this spring one of the features will be a crop in surprising early abundance (thank you, rain!), namely zucchini. Zucchini, however, isn’t the first food most winemakers turn to when looking for a pairing. “Zucchini, and most vegetables, are not super wine-friendly, especially when raw,” Dave Potter from Municipal Winemakers and Potek points out. “I’d be grilling the zucchini on the bbq with some olive oil and garlic and then drinking it along with all the other stuff I’ve put on the grill with a chilled red. I love chilled, lighter-bodied grenache with bbq’ed veggies.”

Indeed, this Grand Tasting might be he chance to fall in love with grenache, if you haven’t (and if not, why haven’t you? it’s the place where syrah and pinot noir make lazy passionate love). Larry Schaffer of tercero wines, who has been baking bread almost as good as the wines he makes of late, says, “I make a pretty killer zucchini bread with cinnamon, apple sauce, and a touch of sour cream. A lighter red actually goes wonderfully with this – perhaps my Verbiage Rouge, which is a grenache-based blend.” Meanwhile Drake Whitcraft of Whitcraft Winery was so flummoxed about the zucchini question he “asked a somm friend and he said my grenache because it’s light and floral and will play off the lavender and subtle herbaceous character of the wine while still allowing the fruit to show through.” Perhaps Mikael Sigouin of Kaena summed it up best, “Grenache is a natural pairing. Whether it be fried or any other combo, grenache works incredible with veggies because of its feminine nature. Aloha!”

Of course, there are almost as many ways to prepare zucchini as they are varietals you can turn into rosé. “As far as zucchini goes, I'm a huge fan and love to use it with the spiralizer to make a really great pasta with it. It’s a great way to save calories and it tastes just like pasta but without all the carbs,” says Katie Grassini from Grassini Family Vineyards. “I've made a great turkey carbonara with spiralized zucchini which would be great with our Articondo Bordeaux Blend.”

That Bourdeaux blend, just one of the many featured from hot spot (pun intended) Happy Canyon, helps prove there’s practically no varietal you can’t grow in Santa Barbara somewhere. Just from the winemakers quoted in this article, a mere 5% of those pouring on Saturday, there will be Sauvignon Blanc, Cabernet Sauvignon, Rhone white and red blends, Gewürztraminer, pinot noir, chardonnay, and sometimes surprises under the table (talk your pourer up, especially if he or she is the winemaker).

It all gets summed up well by Larry Schaffer, the loquacious man who aptly named his blends Verbiage, “I love Vintners' Weekend because I can meet so many wonderful wine-loving people who make the trek from both near and far to enjoy the wines of the county I’ve chosen to call home. It’s a celebration of part of what makes this county special – the wines, the food, the people.”
Posted by George at 9:46 PM