A Rosé Cocktail Will Drink as Sweet 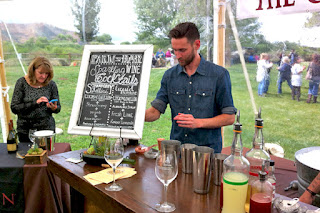 Trying to do things with one hand behind your back is tricky, sure, but sometimes it means you get awfully clever with your free hand and do something wonderful. That’s the way to consider the challenges facing The Good Lion as they develop cocktails for the Vintners Festival Grand Tasting on Saturday, April 23. The Good Lion will be serving up drinks in the Connoisseurs Club section of the event (where Industrial Eats will be too, as if you need more incentive).

But these won’t be just any drinks. First, the event only has a beer and wine license, so they can’t use any hard alcohol. Second, while the previous three times they’ve had this gig they worked with Santa Barbara area bubbly – a relatively common ingredient for many cocktails – this time it was suggested they try to make drinks with rosé.

In a recent phone call Brandon Ristaino, owner of The Good Lion, began by saying he’d just finished reading Spritz: Italy’s Most Iconic Aperitivo Cocktail, and “I was all juiced up on aperitif cocktails. We’ve always liked using sherry, for example. But this was challenging: do you stir it or shake it or float it? We decided to shake it. We’ll use short shakes; it takes up some of the room ice would, so we consider it a flavored dilutant.”

Ristaino talks about the involved research process coming up with new drinks, including running through flavor bibles well before any liquids get mixed together. In this case, “the melon notes in rosé pair well with tropical fruits, so that’s how we got to papaya.”

He’s also had papaya on the brain, for he’s working on a new project he hopes will open early summer in Santa Barbara’s Funk Zone that will have a more tropical/Caribbean flavor to it than The Good Lion. “That was tricky, as we like to source locally,” he explains, “but then we found these dudes in Carpinteria with a big greenhouse growing passion fruit and papaya and soon bananas.”

The strawberry-centered drink was even easier, as rosés often have strawberry notes. Do be prepared for some interesting possible variations if you try one of the drinks twice. “We’re going to be working with a mix-and-match case of rosés,” he points out. So while he and his team will try to decide as they open which wine profile – and remember Santa Barbara rosés are made from varietals ranging from Pinot noir to Mourvedre – matches best for which drink (the Strawberry Fields will tend to get the richer rosés), consistency might not be easy.

Ristaino is looking forward to the event, as such appearances are The Good Lion’s marketing. “Rather than spend thousands on PR I’d rather do something more organic and get drinks in people’s hands and meet them,” he insists. So stop by and do just that.
Posted by George at 2:57 PM