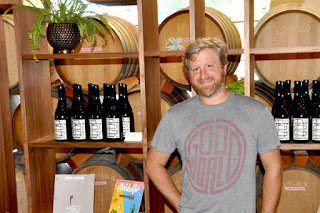 Potek's label might seem inscrutable at first glance, but this is a wine that deserves contemplation. It turns out the lettering is based on traditional Romanian rug stitch patterning. The winery is named in honor of the winemaker's great grandfather, Berl Potek. The story is that his name seemed inscrutable to immigration agents at Ellis Island in the early 20th century, and thus they changed it to Benjamin Potter.

Email ThisBlogThis!Share to TwitterShare to FacebookShare to Pinterest
Labels: a start and a nudge, Dave Potter, KCET, Potek, The Mill, wine