The Hits and Misses in the New Wine Collection at Vons 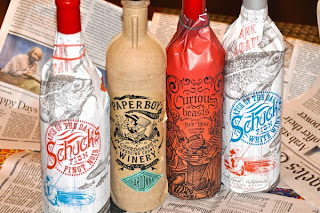 Who doesn't like to open presents? Especially when inside that wrapping there's wine? That's just part of the fiendishly clever hook behind Evocative Wrapped Bottles, a series of wines that the Sonoma-based wine company Truett-Hurst has developed to market at Safeway/Vons.

Take their best-seller of the lot, Curious Beasts Blood Red Wine. It is a curious kitchen sink blend of merlot, petite sirah, syrah, zinfandel, and cabernet franc, but nowhere near as monstrous as such a mix might suggest. Its color is far from bloody-dark; in fact it's light enough you might mistake it for a pricier Central Coast pinot noir, say, but clearly this is made for quaffing about the kids busy bobbing for apples, plus it's only 13.5% ABV, so after a glass you can drive them home. Curious Beasts is tasty enough, but there are better bangs for your buck at the $15 price range, and if anyone really bought it for the $29.99 Vons list price before using your Vons Card, you better really like the Day of the Dead woodcut stylings on that paper wrapper. (They are very well done, so all kudos to artist Kevin Shaw at Stranger & Stranger.)

Want to read the rest then do so at the KCET Food Blog.
Posted by George at 5:30 PM

Email ThisBlogThis!Share to TwitterShare to FacebookShare to Pinterest
Labels: a start and a nudge, KCET, paper wines, Truett-Hurst, Vons, wine