A Shell of a Good Time 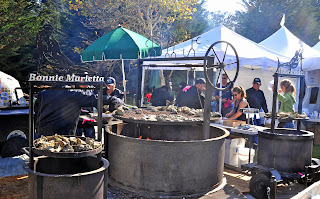 I never thought I'd get to say, "I've eaten enough oysters," but I did just that this past Saturday, October 19 at the Central Coast Oyster Festival in Morro Bay. If you're a fan of the bivalve it's an event you shouldn't miss, held on the lovely Morro Bay Golf Course.

There's no better way to kick off than at the Morro Bay Oyster Company booth, both to support local and because their oysters are briny delights.We shared a half dozen that were practically quivering fresh, 3 in a cucumber-melon mignonette, 3 in a smoked chipotle vinaigrette. It would have been easy to just stay there, getting more trays of those, and people were also ordering a ceviche/guacamole combo plate I'm still kicking myself for not getting.

For there were more oysters in more guises waiting for our gullets. High Street Deli ha a cute little set up in the middle of the fairway and although we got there only 3 hours into an 8 hour event, they had already sold out all their lobster roll. Rumor has it that was because it was lobster roll. Not ones to cry over missed crustacean, we opted to split an oyster po'boy. Wonderfully flash-fried, without a hint of grease, and lavished with a piquant remoulade.

When in doubt at an oyster festival, keep eating oysters. The options were so good and varied, from oysters in puff pastry to oyster chowder to an oyster flatbread--and, yes, the event had so many enticing options we actually passed on getting to have Full of Life Flatbread--that choosing was no simple task, only a bit easier than stopping eating. So we also shared a oyster banh mi sandwich from Thomas Hill Organics that was nearly the size of a Frisbee (we were very glad we shared). Again, all the flavors were spot-on, the vinegar and chili and the oyster as a very clever star, if not so traditional.

What did we wash it all down with? We actually skipped the wine area and stuck to beer, primarily Tap It, which brought a good 6 of their beers along. Their IPA is a fine West Coast example that's plenty hoppy without actually hurting your tongue and for oysters the Full Blown Stout was a glass of creamy loveliness cut by a necessary and balancing last blast of bitter and smoke.

And there were bands, too--this is a music festival, to boot--like Diego's Umbrella, a band that rocked out "Hava Nagila" featuring a mohawked drummer (imagine the dream punk Bar Mitzvahs!) and the pleasantly poppy, KCRW-radio-ready Smallpools and the engagingly hippie (and I don't say that easily) He's My Brother She's My Sister.

How rock solid of me. I got through this whole post without making one Morro Bay Rock...oh, fiddlesticks.
Posted by George at 8:30 PM