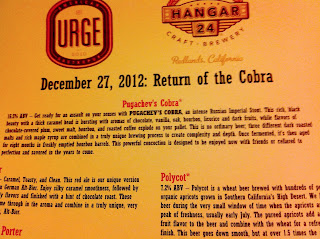 So you can fire up the porch heater when you're dining outside on a chilly (it does too get chilly) December southern California evening, or you can order one of these beauties and get toasted from the inside out. I've got a weakness for Russian Imperial Stouts, which are to Guinness what Thomas Keller is to Guy Fieri, except: 1) it's no fun drinking Thomas Keller, and 2) if the occasion is right, and the need for something light in weight if dark in color called for, a Guinness is ok. Fieri never is. But North Coast's Old Rasputin is one of my two impeachables (along with Pliny the Elder); Stone's IRS always rocks (and I embrace that cliche and pun for all its worth); and then there's Ballast Point's Sea Monster, Oskar Blues' Ten Fiddy, Port's Little Santa's Helper. It's a deep dark list of wonderfulness.

So, of course, I had to take a shot at pulling off a Pugachev's Cobra. It seems in aviation, and remember that brewery's name is Hangar 24, if you can emulate test pilot Pugachev, who could maintain elevation while pulling the nose of his plane straight up, so the jet would appear a flying "I" in the sky, you've completed a Pugachev's Cobra. Keeping your elevation while downing one of these, or I should say sipping, which you'll do not just because it's 16.5% alcohol, but because it's a non-stealth-bomber of flavors, isn't easy. But it's worth a shot. For it doesn't taste that hot, not on tap, at least, where its creamy mouthfeel keeps you from the burn--there's barely an alcohol spank at the back of the throat when done. Instead it's coffee and caramel and vanilla, and there's no doubt a bunch of that bourbon barrel has imparted its ways on the ale. If there was ever a gustatory reason to attempt something like an Irish Car Bomb, it would be an excuse to drink one of these, a mix of liquor and beer that isn't just meant to turn your cerebral cortex into slurry.

A challenge beer, yes, but one with surprising finesse.
Posted by George at 8:00 AM