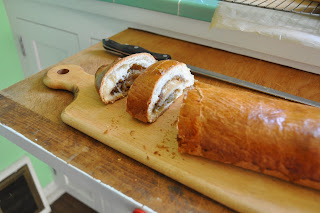 Easter has long since come and gone, that Jessica Foster bunny with caramelized almonds and fleur de sel is just a distant delicious memory, and somehow I never wrote about trying to become my mother. For I did, with Chryss's help, of course (as she's way more a baker than I am and is a mother, so has that going for her too, as if she needs more), by resurrecting a family recipe, the Slovak version of kolache, a breakfast roll stuffed either with ground nuts and raisins or poppy seed filling. I've longed for it for years, lamenting its loss in the Indy even, since my mom's been gone since 2006. My sisters finally found the recipe in mom's stuff, which was hard as everything was alphabetized oddly, or so they told me. And then I just said this year's got to be the year.

There's a lot to risk, trying to make a food from your childhood. Perhaps your memory is sweeter than the food itself. Perhaps you can't do it, and that just pushes you even further adrift away from whatever connection that might have tethered you. The dead never get more dead, but they can get less living, if that makes any sense.

But I did it anyway. The pitfalls were numerous, as the recipe was bare-boned to the extreme--it even left out when to add the salt in its ingredient list (good catch, Chryss!). Since it's pastry, it's all about its dough, and the part I most remember is getting to hold the pot while my mom stirred away at what first seemed like cement, but eventually stretched into something magical. When I got older I'd get to stir, too, and we'd take turns hanging onto the pot as the dough would pull it this way and that if left unheld. Chryss and I tried that for a bit, but then we cheated, using the heavy duty Kitchen Aid mixer and its torque and mighty pastry hook. The whole process was faster, cleaner, and I still feel like I cheated, that the country folk Slovaks would think me a city upstart who might as well be Czech. Sorry, ancestors.

You put that in the fridge overnight covered with a dish towel, and in the morning it's practically a volleyball of dough, ready to get separated into smaller balls (the recipes doesn't call for how many, but we went for 6--a pretty good guess), and then those get rolled out so they can be stuffed. By what, the recipes is mute, so memory had to take over. The walnut one I knew my mom used to grind down in the cellar with a hand grinder, which probably makes you think she's wearing a babushka and standing in candlelight but this was very suburban New Jersey. We, instead, used the food processor and a recipe for nut filling Chryss had found online, which I figure is just many villages' wisdom made magically accessible and so therefore fair game. Some brown and granulated sugar. Lots of big juicy sultanas (do not be afraid of the raisin!) then were mixed in--not chopped, no. The poppy seed ones, well, I remembered that coming from a can (as did cherries for pie--cans were made for fillings, it seems). When Lazy Acres failed me I figured the European Deli & Market had to have something to do the trick. Once there, I was confronted with cans in languages I did not know and felt at home (being a horrible grandson and never much learning my grandmother's tongue beyond volke whoonsuit [that's very very phonetic, not accurate]--which means something akin to spoiled, bad child). In small print on a label it did say poppy seed, so I figured I was good, especially with the photo helping me. Either that or I had bought coffee grounds. 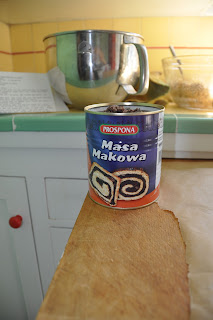 Turns out both fillings, while perhaps not quite those of my youth, tasted wonderful. The nuts one became crunchily delicious after baking and just the right amount of breakfast sweet (and I like me some breakfast sweets). The poppy seed had that poppy funk that it is both interesting and a tiny tiny bit offputting (much more so when I was really young and refused to eat it at all)--it's a kind of bitter that's almost hop-like, I think, now. Then there's also some sugar, and some citrus peel, and a bit of whatever else Eastern Europe likes in a can, I guess.

The recipe meant we baked 3 of each, each a foot long, so we gifted some. Since that's what you do in the Old Country, and they had some good ideas, you know. Good baking makes good neighbors.
Posted by George at 8:00 AM