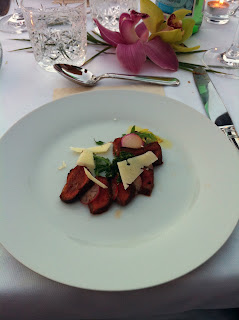 It’s not every day a restaurant serves you something as wonderful as hiramasa crudo, a delightfully rich yellowtail, coolly elegant and Eastern, sitting in a shallow pool of smoked gazpacho, zesty and Western. But this clever commingling of cuisines was featured at no everyday restaurant: It was the first Santa Barbara pop-up of the Los Angeles underground restaurant Paladar, started by friends at USC out of their own apartment. Front-of-the-house man Robert Kronfli and Chef Alex Chang would do two 30-person seatings a night, and, said Chang, “It was getting kind of crazy, and the kitchen was taking a beating. Plus we were living in the same place.”

Want to read the rest, then go do so at the Indy site.

Email ThisBlogThis!Share to TwitterShare to FacebookShare to Pinterest
Labels: a start and a nudge, Alex Chang, Independent, Paladar