The Mousse That Baaa-ed: Black Sheep Is Back 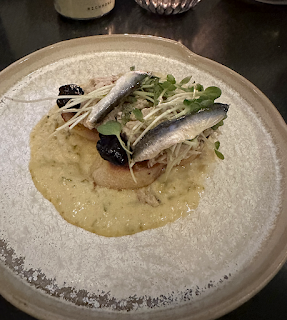 Since closing down on September 4 at its longtime Ortega Street location, the Black Sheep has been reborn on Cota Street a mere three months later. In addition to the location change, it's now officially The Black Sheep, SB Brasserie, which is fitting as the new location was for two decades the home of one of Santa Barbara's legendary restaurants, Mousse Odile. Co-owner, GM, maitre-d Ruben Perez definitely hopes to invoke the French spirit of the spot, offering coq au vin and cassoulet and more, but with a definite Santa Barbara, contemporary twist. He found a great partner in the endeavor, chef Jake Reimer, who has done the high end executive chef for restaurant groups and the private chef gig, among others, but seems very happy to have fun with Santa Barbara produce and seafood.

We had the great fortune to be hosted for a culinary trip through permutations of the tasting menu they are already billing as "famous," which might not be conceited much as predictive. For everything we tasted rocked--vibrant flavors, thrilling freshness of both ingredients and concepts. So while I could go on and on about, say, the perfect steak frites, starting with the tender Entrecôte meat itself, and then a secret sauce that's got some anchovy in it but is otherwise vegetarian and rich and almost worth licking the plate to enjoy (luckily instead you have plenty of yummy handout fries), I won't.

I also won't talk about the reinvigorated creme brûlée, spanking the oft-tired dish back to life with a pinch of salt and what must be a fistful of Tahitian vanilla bean.

Nope, to focus, let's just talk about the three dishes that opened the meal and hit the table simultaneously. Above you see an essay in fishy contrasts, some lightly pickled sardines atop some sprouts atop some tuna you can't see, but it's confit and rich. Then there's a slice of baguette on the plate awash with a mustardy sauce. The contrasting textures and flavors kept your mouth alive to flavor's possibility. 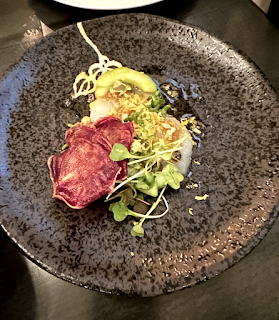 Here's the evening's crudo--it's listed on the menu as d'jour, as it sort of has to be as it needs to be something just caught to sing. This one did a little aria, so might have crawled into the kitchen on its own. Well, if scallops crawled. Again, all the accents aren't just for show but push the dishing fascinating angles and richness without hiding the pleasing, starring salinity of the scallop. 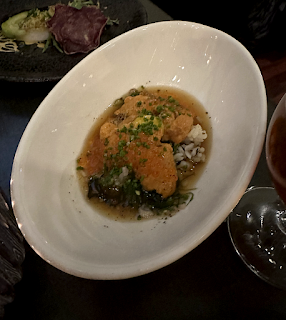 And then, as a true Santa Barbara nod, here's uni with "dirty" rice, seaweed, and tobiko. Things get a bit soupy as you eat it, but with the rice it's kind of a wet porridge of big flavor delight. Here the accoutrements reel the urchin's assertiveness in just a tiny bit, which works with all the other vivid reminders of the sea in the bowl. It's a great example of lots of technique being brought to bear on something that seems simple.
It's wonderful to have the Black Sheep back.
Posted by George at 5:54 PM