Delights in the Lion’s Den of Buellton 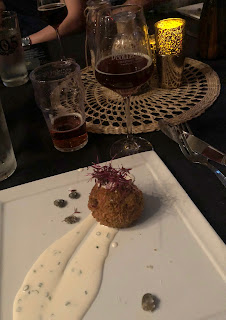 It’s a tribute to David Walker’s passion for his project that, as he talks you through the creation of Firestone Walker’s core beer Double-Barrel Ale (DBA), his story makes the beer taste better as you drink it. That’s only fitting, of course, as his rapturous ode to DBA kicked off a Barrelworks Lion’s Den Dinner on September 24 in Buellton. And as you might know, Walker is the Lion at FW, while his partner Adam Firestone is the Bear.

Being able to attend this dinner was one of the perks of membership for the Brewmaster’s Collective, now in its second year. Think beer club for the nerdiest lovers of dark, deep, and/or sour ales, which, given this dinner was sold out at 66 pleased people, is a quite large group. The people for whom Walker joked, “You got curious and left my DBA behind.”