A Review of "The Baseball 100" by Joe Posnanski 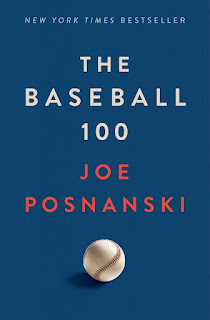 It took Joe Posnanski three attempts to accomplish the feat that is The Baseball 100. When he finally pulled off the basis of what became this book, publishing it serially on The Athletic website from December 2019 to April 2020, the intro for each entry included boilerplate that offered, “In all, this project will contain roughly as many words as Moby Dick.” For the record, the Avid Reader Press hard cover Baseball 100—869 pages, the Penguin paperback edition Moby Dick—a measly 687 pages. Suck it, Melville.
I must admit, that’s my tone and not at all the way the very level-headed Joe Pos would put things. As for calling him Joe Pos, that’s how he’s known to those who have been reading his award-winning journalism for years, from local sports columnist duty in Augusta, Ga., Cincinnati, and Kansas City, to time at Sports Illustrated when that meant something. He has also authored six books, including one on his hero Buck O’Neil and one about how Houdini became not just a magician, but the Kleenex of magic.
Care to read the rest then do so at the California Review of Books.
Posted by George at 7:41 PM