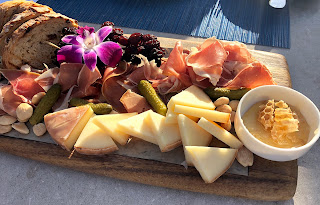 When a chef shows up with a board he insists is "a little bit of where I'm from," you have to be happy to learn his story by tasting away. Such was the case this Saturday when we got to enjoy a delightful dinner at the re-opened Dining Room and Terrace at El Encanto, A Belmond Hotel. Executive Chef Bruno Lopez took over the top toque at the property in November of 2020, obviously not the most auspicious time to do so. So this late spring is sort of his coming out party, assuming the folks coming out have been vaccinated, of course.
That charcuterie board shown above isn't on the menu, but it does capture his soul, sense, and savory simplicity. The meaty star is Bayonne ham, and as a New Jersey born and bred boy, that doesn't led to instantly desirable connotations. Luckily, Chef Lopez's family has Basque roots, and that leads to Bayonne ham, tender and salty and delicious, if pleasingly not as fatty, as Jamon iberico. Keeping with the theme, the cheese is p'tit Basque, the semi-hard sheep's cheese that manages to tease you along with a creamy, salty, nutty flavor that never over-powers so you keep wanting that next bite for more.
The two hints Lopez could surprise, of all things, were accoutrements on the board--those raisins and that honey comb. The latter, which generally I might shy from, not a big fan of sweet with my cheese, was redolent of fennel, and walked a sweet-herbal line that really sang on the raisin bread. And then the raisins--they came as if someone managed to dry a cluster of grapes, a kind of memento mori of the promise of wine. Beautiful, it also elevated the raisins, as they weren't quite as dried as most. 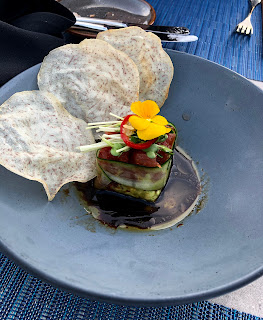 For our actual off-the-menu appetizer order, we got the spicy yellowfin tuna tartar. See above, on the black wide bowl that sits it off so well. Lopez likes draping edible flowers over dishes for effect, and it certainly works here, adding color palette to the flavor palate. The see-through thin taro root chips are great vehicles on which to devour this dish that ranges beyond a mere sushi-esque exercise, especially given the soy sauce vinaigrette also gets a surprising double-down of umami from some smoked truffle, and then the lime, daikon, and chilies do all the expanding flavor work you would expect. Clean tasty, and the fish remained the star. 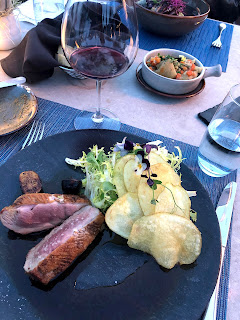 For my main I thoroughly enjoyed the seemingly too-medium rare but someone knew better than I did Maple Farms duck breast. So crispy the rendered skin, so tender the meat. Served in a seriously amped up jus, the plating also delivered, with roasted figs, frisee bringing some crunch and bitter, especially in a perfectly simple vinaigrette. And then homemade Kennebec potato chips. I like chips.
Chryss had the kombu Portobello ramen--yep, a veggie ramen with what she joked was at least three whole portobellos (that's not counting the ones that made the intensely rich broth). It offered red cabbage, ramen noodles, scallions, sesame seeds, wakame, and a really warm bowl on a still slightly chilly April night on the Terrace. (There are heaters. And you can get a blanket if you need one, too.)
There's also one side on our table, the artichokes "southern France style," which evidently means a kind of fricassee with chopped up artichoke hearts, very tender, along with carrots and capers and lots of oil and probably a good shot of lemon juice. Better with the duck than the ramen, of course (sorry, Chryss).
We had no room for dessert, but wished we did have second stomachs to nibble at either Goleta lemon--lemon curd, pistachios, white chocolate, and yuzu mousse--or tres leches chocolate tacos, and all I ask is that you go back and read those four words again.
Is the wine list somewhat over-priced? Well, is this a luxury hotel?
But that's why you come here, for luxury, extravagance, and a simplicity of conception and execution only time and money provide. Plus, that Terrace--what a wonderful aerie above our town, making Santa Barbara (at least before things dry out through the summer) shimmer with green and then ocean blue as far as the eye can see. Our night the moon rose to our left as the sun set to our right. It was as if the whole solar system was willing to offer a show. Hard to beat that. Especially with a meal so satisfying.
Posted by George at 8:50 PM