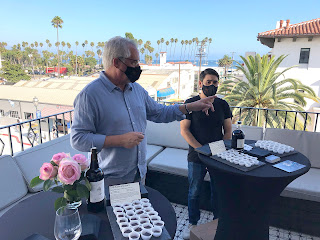 Sure, ÜBER-talented (get it?) winemaker Doug Margerum can get away with pointing without being rude. I mean, here's a man who can bake wine and not just get away with it, but sell it to you and make you like it. A few weeks ago Doug presented his latest vinous creation, Mute-Age, at a special series of rolling press tastings (to keep us all safe from COVID-cooties) on the veranda of the super swank Alcazar Suite at Hotel Californian, high above his usual Funk Zone Margerum Wine Company tasting room. He even made sure there were bites to be had, the luxurious chocolate creations of Mike Orlando's Twenty-four Blackbirds Chocolates. It's moments like that afternoon that Santa Barbara is built for--all that's delicious to eat and drink and then you get so much to drink in with your eyes, too. (Just look at the photo again, which doesn't do the glorious afternoon justice. And god, do I miss getting to go out.)

So, what the heck is Mute-Age, you may ask? If it sounds all French to you you're right; it's a play on mutage, which is a way of making sweet wine by, yep, baking it. Doug put some of his Grenache (which is delicious on its own, of course, so that certainly helps as a place to start) in 34 liter demi-johns--think very large tear-drop shaped bottles--and left it on the roof of his winery in Buellton. What he was doing is what the French do (minus the Buellton part, of course) to make Banyuls, their well-regarded dessert wine that comes from near the Spanish border. You see, baking the wine makes it inhospitable to its yeast, which then quit turning sugars into alcohol. More sugar = desserty goodness. In particular, it makes a great match for chocolate, which is actually a tough thing to do with most red wines, despite what years of crappy Valentine's Day pairing might have pretended. Tannins on tannins just means your tongue gets mugged.

But sweet wine, that's a different, happy story. Doug, who does quite a few wine dinners every year (in a normal year, of course), wanted to have something he could pair with a restaurant's chocolate creations, and since he loves tinkering with classic styles (see his Marc or his Amaro that we'll get to it a minute), creating a VDN or Vin Doux Natural was, uh, natural to him. (VDN just means the mutage happens after maceration of the grapes.) The good news is you don't need to know any of the process, which seems partially magically anyway--Doug admitted when they tried the juice a year into its aging on the roof it wasn't showing any Banyul characteristics--but at two years, voila! What you do need to know is it's delicious, rich and unctuous, still holding its now even deeper plum and pomegranate fruit, and a perfect match with Twenty-Four Blackbirds 75% Kokoa Kamili from Tanzania. 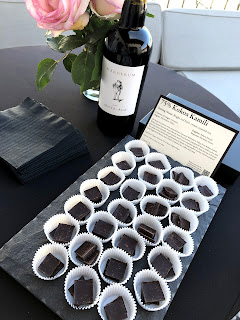 Knowing he had to give us more than one taste of something, and having not merely a chocolatier but a chocolate maker at his side, Doug also provided tastes of some of his Amaro. Based on this year's Tales of the Cocktail, amaro might finally have crossed the tipping point from a bartenders' favorite plaything to something more casual cocktail imbibers ask for. Of course, Doug's been making his for seven years based on when I first wrote about it, a delightful if indeed bitter (that's what amaro means after all) mix of fortified wine, aging, and more botanicals, barks, and roots than in a witch's treasured recipe.

In the multi-varied world of amari (that is the plural), Margerum's sits pretty dead center; it matches well with a Lucano or Ramazzotti, say, if you know some of the more available Italian ones. For those not big bitter fans, it might curl the hairs of your tongue a tad (oh, you know what I mean), but it's nothing like some of the more astringent amari, and far from the medicinal getting-used-to that's Fernet-Branca. Turns out Margerum Amaro also has a great Twenty-Four Blackbirds pair: a 75% Palos Blancos from Bolivia. Wet your whistle with some Amaro, then slowly let a bite of Palos Blancos melt in your mouth and you suddenly are tasting the most delicious Raisinette ever, or so it will seem. I can only imagine the movie you should watch while having this culinary one-two punch (maybe something gorgeous and wistful like Wenders' Wings of Desire?).

And to pile on, Orlando is making an Amaro truffle you can buy at the Maregrum tasting room. You want those, too, the most adult of decadent delights. 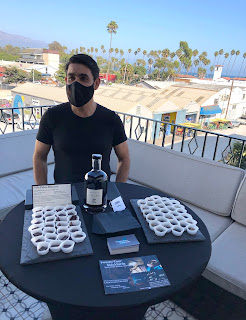