Only the Dough Is Sour at a Bettina Bread Class 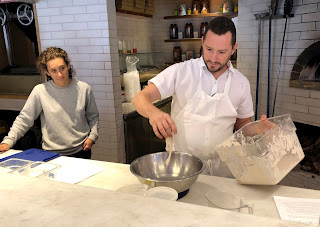 How hungry were our ancient ancestors, who looked at wheat waving in the wind and thought, “Yum, delicious!” I mean, the stuff looks like weeds. And to get the germ out you’ve got to mill it—quick, call, Thomas Alva Breadison to invent a machine to crush the stuff just enough! And then something invisible in the air has to make it ferment. Yeasts are the hungry magical Houdinis of the story. Finally, you have to learn to bake all of that glop you slop together—quick, call Bready Crocker!

OK, that’s a bit playful (and maybe overwrought), but so is breadmaking. So if you dare to wander into that deep water, it's best to have a very good guide, and there's none better than Brendan Smith, co-owner of Bettina with his wife Rachel Greenspan (that's them up top). The couple, who just celebrated the one-year anniversary of their fine pizza (and much more) shop, are offering sourdough bread baking classes every couple of months. If the ins and outs of bread interest you, there's no better way to spend a Sunday morning. Plus the event ends with a pizza and wine lunch included.

My front-and-back instruction sheet is so covered with scribbled notes I can barely read them all--that's a small hint at all the wisdom Brendan shares in the three hours you get to watch him discuss how to feed a starter and then turn that into a luscious loaf. You get a starter too, and by the end it's easy to feel it's like high school health class and you've been given a doll you have to pretend is your baby for the weekend (what a great course in birth control that lesson was, no?). It's a living thing, and you hope not to kill it, even if you keep dumping some of it to feed it (hey, friends, who wants starter? or who wants pancakes?).

Brendan certainly knows his dough. He couldn't even begin to come up with an estimate of how many loaves of bread he's baked since he gave up studying for law school, and inspired by Mark Bittman's How to Cook Everything, made his first loaf for stress relief and instead found a new calling. After a year apprenticeship at Orchard Hill in New Hampshire he ended up at famed Roberta's pizzeria in Bushwick Brooklyn, where he met Rachel, then a fancy-food specialist, and the two decided to load up their lives and move to Montecito-y. (OK, they ran the mobile pizza delight Autostrada first.) Add it up, and Brendan guesses he's made 60,000 pizzas, at least. Which means if you ate one of the pizzas he's made a day, you would have had to start before the Civil War broke out. I mean, who forgets the Lincoln-Douglas debate that argues over pineapple on pizza....

Despite the class's length of three hours, he's actually condensing the process that would take eight hours in your own home--there's a lot of resting downtime so you can let proteins build necessary chains. Lots of proofing. And then there's all the new words you get to learn, like banneton (the wood/reed basket you proof in) and lame (the device that holds the razor blade so you can score the bread before it bakes). And while Brendan gets to use a pizza oven that cranks the red oak fired heat at a temperature higher than Ray Bradbury ever considered, he explains how you can cook at home in your own oven, using a Dutch oven to hold the initial steam (don't let that crust dry out at first bake!).

When you finish, you could end up with something like this lovely loaf Rachel is showing off. Or maybe you won't, but it's bread--even the "failures" taste pretty good. And teach you more for when you make that next loaf. 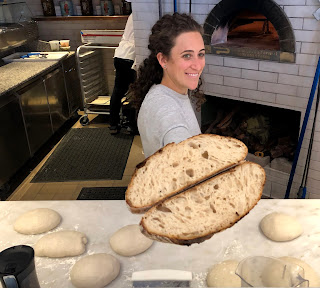