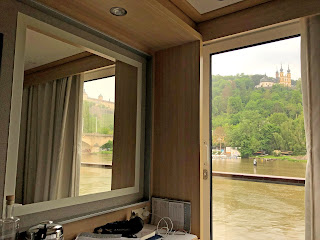 So we wake up on Saturday, May 25 (yes, I'm that far behind writing these), open our cabin's curtains, and the photo above is the view. That's the Kappele, a mini-Baroque gem designed by Balthasar Neumann--lots more about him in a bit--and while it's striking, we won't even get to its bank of the Main River today. That's how crazy such an agenda is, hitting so many towns on one cruise. Of course, it also makes us want to go back. Here's a fuller view, if you need it. 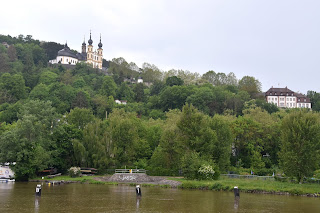 And speaking of amazing views, the rivers in Germany are swan-full, it turns out, and sometimes those swans are full of cygnets, who treat mom like a feathery Uber.  Heavy cute wildlife "oohs" followed. 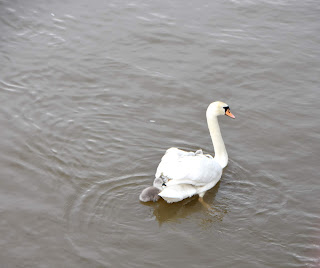 Today's included tour in Wurzburg is of the Residenz, commissioned by two prince-bishops, back in the day when the old church-state barrier was far more permeable. So, they went for Baroque and got this ridiculously opulent palace built in the 1700s. (And re-built after WW II, as over 80% of Wurzburg was destroyed in one 20 minute air raid near the end of the war. Go Allies! Want to see what a city looks like if all its roofs are gone? Here's your chance.) Alas, May 25 was also a rainy morning, so I opt not to slog with my DSLR and try to get by on phone photos. Here's the entrance, for example, with a wet, yellow-umbrella-ed Chryss in foreground. 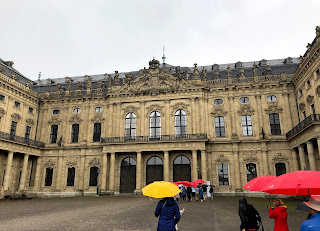 Turns out, you don't get to take any photos in the Residenz, flash or no, so it's a good thing I didn't bring the good camera just to get it locked up. Go follow some links to see the amazing things we saw, like the truly awesome (the word once meant something) Tiepolo fresco ceiling--the largest one in the world--over the grand staircase. It celebrates the four continents (the 1700s were short three continents, or maybe we still have ones we aren't counting, who knows?), in wonderfully racist ways a 45* might love. To top it off, Tiepolo worked in the whole project's architect, the already mentioned Balthasar Neumann, as a figure perched on a canon (the bigger the canon, the better the architect?). Throughout, it seems to be trying to give Versailles a run for its overdone money, and I would argue often wins. Impressive, in that way that makes you want to lie down and cry for all the peasants of the day.

Both then and later on a return walk through town after lunch that Chryss and I take we get to roam the gardens, and on the return trip, I even have the good camera as the weather mostly breaks. So here's what those look like, very ordered and proper, offering a series of perspectives clearly meant to stun. No, not the photo with us, of course. 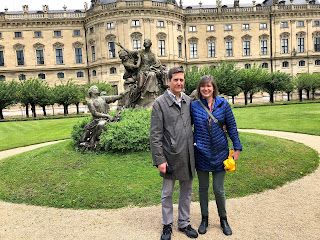 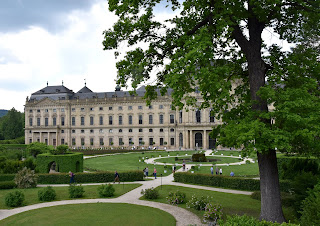 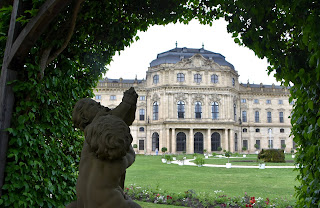 So I'm totally conflating two walks about Wurzburg, the guided one after the Residenz and the one Chryss and I made on our own after lunch, but it will work better for story-telling, so chronology be damned. (Note the weather clears as the day goes on, so assume anything with more blue sky is later, if that's important to you.) So I can be as easily impressed by Bacchus 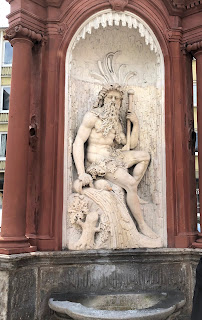 as a grotto I can't even identify from tourist websites, despite other tourists clearly checking it out. 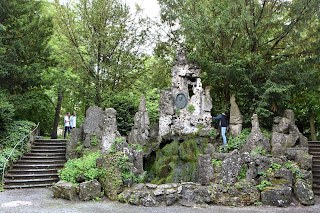 That grotto is part of a refreshing urban greenbelt that wraps around the historic city like a semicircle from the Main River. Walk and see cool things, even something as simple as a mini-garden. 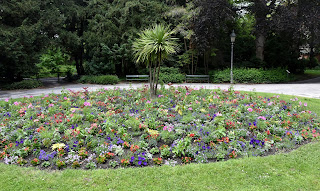 More in the historic center proper there's, of all things, churches, to the point where one I can only identify as random church. My guess is it was built for someone's god. 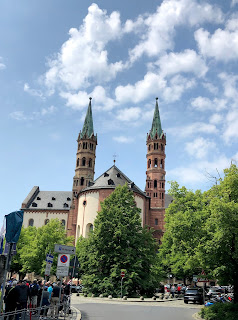 Do note, at least to me, those towers might be confused and think they're minarets. But those weren't much in the Romanesque mind, I think. Churches to Mary, sure, those should happen, but it's surprising Marienkapelle, at least to me, is so red and white, like candy canes melted down and said, "What they heck, let's be a cathedral!" (Oh, it's only a chapel as it doesn't have its own parish.) 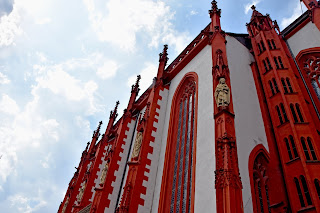 Ghoulish me particularly enjoyed the decorations on the funeral chapel in town, echoing our love for all things Halloween, although it's a bit more serious when it's actual stone and not plastic you got at Costco. 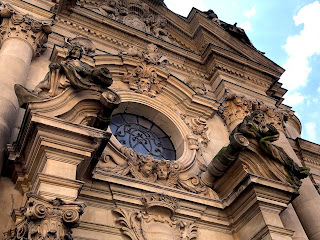 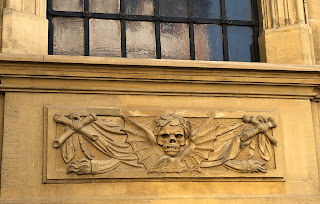 Oooo, very spooky! But it wasn't the wurst thing we saw 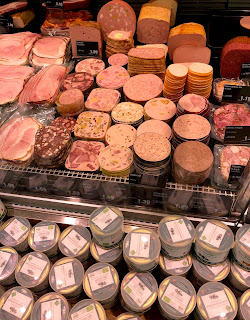 and even better, neither of us was the one who managed to knock over and break a bunch of wine bottles in the same supermarket. But I couldn't help but hear Ingrid Bergman in Spellbound making liverwurst the sexiest of lunch meats.

To change gears without a clutch, yes, there was a Rathaus, one of the most striking we saw in Germany. 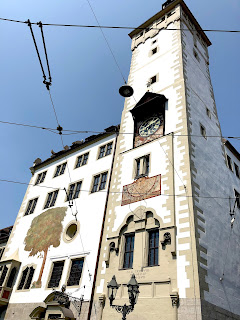 Not far from it in a perfect for sound alcove we got to enjoy a movement by a string quartet. Turns out we were there on a day for a music festival, and so a very young and talented quartet played for free outdoors. I have no photo or video, as you don't do stuff like that at concerts, c'mon. We also walked a bit along the jam-packed Alte Mainbrucke, the oldest bridge over the Main, which doubles as a giant outdoor wine bar. Open container laws, no problem! (Side note: boys will be boys everywhere--one boat cruising the Main with rowdy college-aged lads aboard mooned the Vali as they sailed by. How comforting to know male immaturity knows no national borders.) 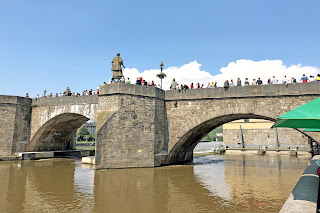 And here's the view north from the bridge, with a power plant mid-vista, like they'd visited Morro Bay and thought those folks did something wise with their key view design. 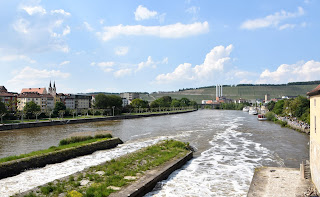 The buzzy scene (no, not that view) was too much for us, so instead we took respite at a bar along the Main closer to where the Vali was docked, UFER Essen und Tricken. On this lovely elevated patio we took in the clearing day views, plus a gin and tonic with German gin (evidently a big thing, now, and from the couple of minis I brought home, a delicious big thing) for me and some Sylvaner for Chryss, as that's the esteemed local wine (more on that at dinner). 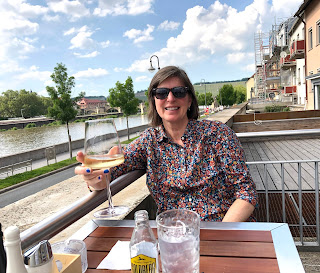 Jesus shared his rays with us. Or maybe that was the liquor. 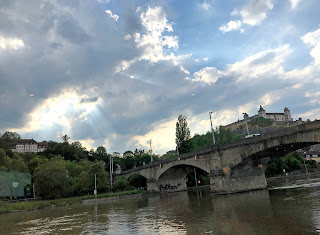 We never made it across the river and up the hill--to Festung Marienberg we didn't go. But the 13th century structure turned into a 17th century fortress looks cool from across the Main. 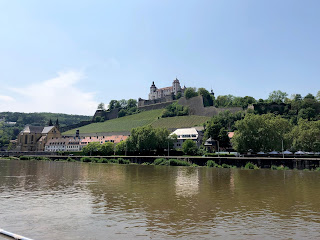 And on our bank of the Main, there's Chryss looking ship-shape. 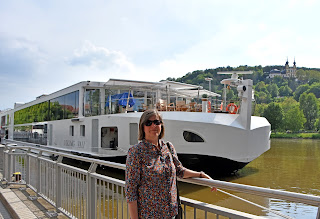 Dinner with a Cruise

The ship has a lot of sailing to do before its next port, so we're off before dinner, even. That means you get a view from the lock that gets you around the old bridge like this one 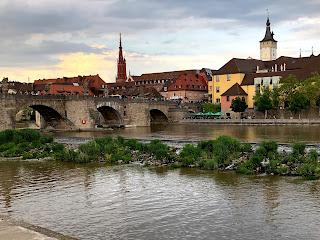 while paying the not-the-free-wine piper having some Horst Sauer Sylvaner. Sure, that signature bottle brings back scary 1970s memories of Almaden, but they stole the bottle style, so just enjoy the very crisp and mineral-packed white. 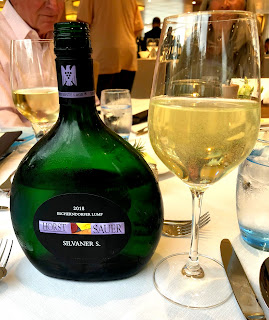 Especially as it goes well with the regional specialties first course of kopfsalat mit radieschen und joghurt, and you can probably figure that one out by yourself, especially with the photo's help. 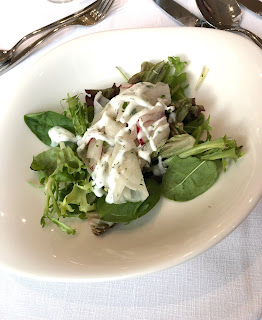 A well balanced combo of tart, spicy, brisk, and creamy in what appears to be a simple salad. Almost as simple is the main course, a breaded sole filet with parsley potatoes you might want to think of as German fish and chips. That's a properly crunchy breading and even better, a bit of a zingy remoulade for an otherwise neutral dish. But the again, sometimes food makes you lean in--a dish doesn't always have to smack your tastebuds up, does it? 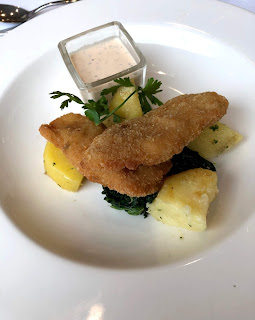 And no, we weren't close to being done with dumplings, for here's dessert, Dampfnudel, which I assume doesn't sound as unappealing to Germans as it does to English-speakers. Glad I ordered it anyway, as that's warm plum in there, plus the vanilla custard coat and the trail of gooseberry (and those always make me think of the Chekhov short story, so that's always a plus). 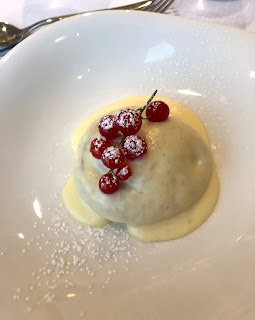 Meanwhile we go through locks like this one, that decides it needs to be an industrial frame for a bucolic countryside. 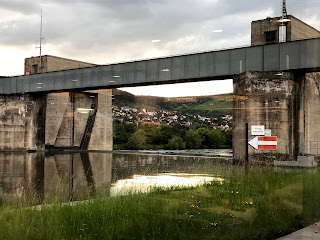 Speaking of which, this village plays coy behind its riverside trees. 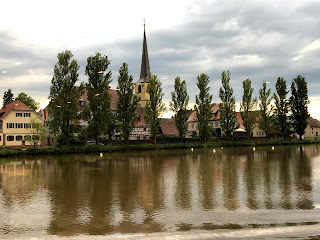 And the sun sets purty, so let's leave it here and not mention the glassblowing demo that was the evening's entertainment, led by a man who needed to just blow and not talk. But it's good to know he gets to exercise his massive Oedipus complex on tourists every few weeks. Don't ask, just watch the sun set. 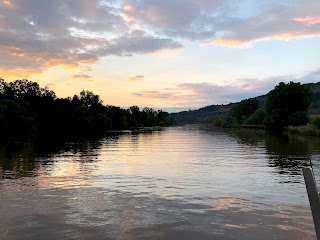 Go forward to Ain't Europe Grand (Tour) with Chryss and George (Day 14)
Posted by George at 12:08 AM