The Wild, Wide World of WOPN 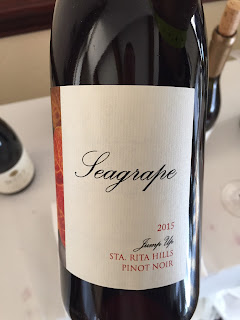 Illustrating a story about a 2018 World of Pinot Noir Grand Tasting (that's their adjective, and it isn't just puffery with more than 150 producers usually pouring at least two wines each...see, it takes a grand amount of even parenthetical words to describe the grandiosity) with a single bottle of wine might seem perverse, but in this case I promise it isn't. There's my first taste of a very long day (this will actually be two blog posts, it's that long a day into night) last Friday at the Ritz-Carlton Bacara, and I choose it specifically because its winemaker was sitting next to me. That would be Karen Steinwachs, who people probably know better from Buttonwood, but then she's got this even smaller designer label to make pinot and chardonnay, and she just happens to be on WOPN's Board of Directors, too. That mostly means she does a lot of work and can talk to the press and say clever things (very much so--she's one of our wittier winemakers).

Turns out the media room makes you very glad you're media; call me fake news all you want, I'll just be over here pouring myself another sample of delicious pinot. Like Seagrape's 2015 Jump Up, a perfect expression of the magic of the Sta. Rita Hills--both light on the balls of its feet and a bit ballsy, too--think Gene Kelly jammed into a bottle. Sure there's cherry, spice, pomegranate, but it's how every tasty bit adds up to a greater whole that makes the wine so lovely.

And that's the best way to think about the somewhat daunting event. You enter into Bacara ballrooms that look as big as a football field, and while some of that is tables of food and cheese and lots of Fiji water (hello plastic, goodbye sustainability), most of it is producers pouring wines and stories. You might walk in just as Santa Barbara legend Richard Sanford walks in, and you feel all historical--he spotted greatness here (well, not at the Bacara--you know what I mean) before nearly anyone. So you go drink at the Alma Rosa table, and he tells you "It's fun again, George," as he's the kind of man who remembers your name and uses it, and times better be jolly as the wines are joyous, especially the 2015 Barrel Select he shares that's blueberry, blackberry, violet, but more than anything, delicate.

But there's so much to taste there's no good way to list all my notes, not even the highlights, like Greg Brewer pouring a 2007 Ampelos Vineyard pinot (yum!) as he discusses the 10-20 year out sweet spot he believes our local pinots find, using a metaphor of flowers that when you get them they aren't quite open and full yet, and then dead the very next day, no, he sees Brewer-Clifton wines opening and opening, growing into their beautiful bloom.

And, of course, WOPN's not just local wines, because why buy the cow when the SYV's a car-ride away? (I think I mixed a bad metaphor there.) No, you can try a producer like Nimrod from Hungary, where the volcanic soil leads to a more minerally wine, and perhaps a better cuvee with only 20% pinot, but mostly built on kekfrankos, and I'm not trying to be wise to say that's just Hungarian for Blaufränkisch, but now you can see how far from just pinot we are, let alone Santa Barbara.

Of course you've got people like Josh Klapper from Timbre sharing a hard cider (very refreshing, especially amidst all the cherry/berry bursts elsewhere), and tables pouring regions/AVAs for you--Morgen McLaughlin was back in town repping Willamette Valley and their typical Oregon earthy-shroomy notes, for example--and soon you run into people you know, and people you just know as you've met them at another table, and everything is a bright bow of delight.

That's what a grand tasting can do for you--prove pinot is doing very well and you can do better if you drink enough of it.