The Brasserie at Third Window Opens 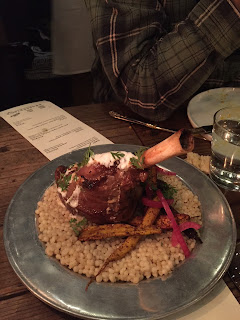 There’s nothing like throwing a six-course meal for about 50 people less than two weeks after opening, but that’s what chef Mandy Barrett did last week at The Brasserie at Third Window Brewing Co. She had to, as Third Window has this thing about St. Barbara — the East Haley Street brewery in The Mill complex is even named after the setting of her legend — and they like to throw her a party on December 4, her feast day.

Want to read the rest then do so at the Independent's site.
Posted by George at 2:44 PM