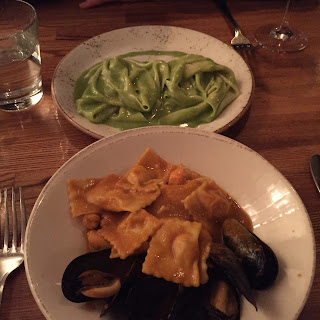 Italian food doesn't have it easy. I mean, the tricky part is it's everywhere like air, and I say that as someone who grew up in northern Jersey, where the air is heavier. Sure, we all like air, but it's easy to take for granted, and have you tried any of that pure oxygen? And I refuse to go to more exotic places, like denying yourself air for fun.

Turns out the air is rarer at Factory Kitchen. At the outer edge of the Arts District, when you approach it for the first time you're thinking much more factory than kitchen in a desolate area where stopping at stoplights makes you a tad nervous (and to get from it to DTLA, you'll pass through Skid Row, home of its own strain of TB). Inside it's still pretty factoried-out, but the owners wanted it that way, so that's a kind of charming. And the food is so much more than charming it ends up seeming some sort of oasis, a sense that even amidst massive concrete pillars this grace can happen.

Fro grace is the only word to describe mandilli di seta, that green pasta at the top of the photo above. This handkerchief pasta is where delicious and delicate deliquesce into one thing, a miracle of pasta flavor in something so fine. It's sauced in a Ligurian almond basil pesto with none of the sharp edges you might get in some hearty pesto, even the garlic refined, and the almond flavor much more interesting than pine nuts. Then that's the whole dish. It sort of threatens you to call it too simple, but it recalls the stories of a master artist, when asked to send sample work to get a commission, simply drawing one perfect circle of paint on paper in one quick brushstroke, and saying, "Take that to your patron." Of course perfection is simple--that's exactly why it's so easy to mess up.

The rest of the meal was delightful, too, from the raviolini di pesce you also see in that photo--much heartier dough, but sitting in a "crustacean sauce" that is as wondrous as that name might suggest, plus four exactly prepared mussels, none of that overcooked shellfish issue you so often get with pasta.

We started with another essay in the brilliance of simplicity, the cremosella salad, a mound of kale (really really good baby kale) and pea shoots (all of freshness) and green beans cooked miraculously to a tender-snap (what method?) in just enough dressing. And then creamy mozzarella, which is not burrata, and I didn't know existed (and can't confirm does anywhere else, if the internet can be trusted). Instead of cream in the center, like burrata, the inside is more like a brie-consistency, but still very much mozz. Seems healthier, and the chalkiness paired well with the acid and lemon in the dressing.

We all owe Italian places an apology. Of course, given the chef here--Angelo Auriana--worked at Valentino for nearly two decades, it's not odd he can make such ethereal food.