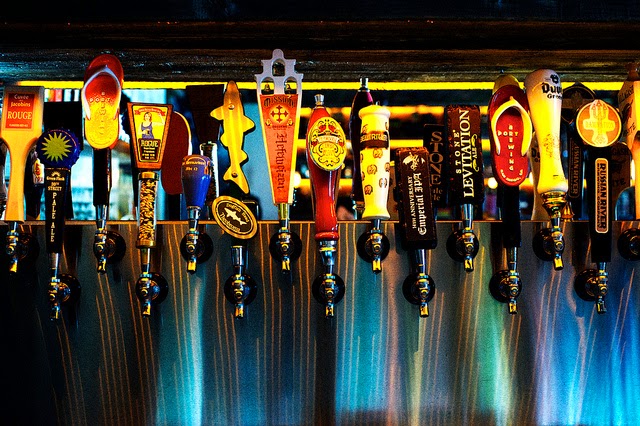 Of course that title means a day of playing taps in the best sense, as SD has the best beer scene in the country. Look one direction, count slowly to ten, turn around, and there will now be a microbrewery behind you, where there wasn't one prior. It's a kind of malty magic.

Here's what you can do in a day and still wake up and do something somewhat similar the next, all without spending all your money or risking a DUI, which will make you spend all your money. It involves a lot of walking, so be ready for that. Begin at Tiger! Tiger! in North Park, where it is easy to park. The place, especially mid-afternoon, is quite laid-backed, even more than its sister bar Blind Lady Alehouse, and hanging out back in the container-carved out porch is certainly a pleasant way to pass the time. If you're lucky there will be Automatic Ale on tap (they make it themselves at T!T! and BLAH--you've got to abbreviate well to be a fine drinking establishment, it seems), and if you're not, there will be plenty of other fine things. We opted to start slow, with nothing too ABVed--a Craftsman Point Five that did session beers proud and a Noble Big Whig IPA that could be a poster child for what a balanced West Coast IPA should be (that is not an oxymoron). Yeah, we kick-off a San Diego beerfest with brews from Pasadena and Anaheim, we're perverse like that. But most importantly, these were beers we don't get in our still sleepy hamlet, enough out of reach of too much Southern CA distribution, it seems.

Next come the walking portion of the day's program, as we hiked ourselves all over town to University Heights and Small Bar. Which it is. Gothed up a bit but in that friendly we serve good food and beer way. People even had their doggies on the patio. What's not to like? It's got a rep for cocktails, plus one of those brunch Bloodys that comes with all kinds of stuff hanging off it, but we weren't there for brunch and didn't want to get so plastered what had to stay for Sunday's. Again, we enjoyed beers--Double Mountain Hop Lava, Rip Current Black Tide IPA, and and Alesmith/Cigar City Ramblin' Rye American Strong Ale. After the walk, we wanted to get some more serious hops on, and did. Plus, I'm pretty sure Rip Current is my new favorite brewery. I had had their Lupulin Lust before (and promise it was love, not just a carnal desire), had their Rip Current Imperial the night before (it's up there with Pure Hoppiness and Pliny the Elder, I'd say), and now they made me really like a black IPA, too. Another big plus for Small Bar, bleu fries, but don't eat them until you've had some fun with the jukebox that even has Big Star on it. We were living large in Small Bar, to say the least.

And then it was time for the hike back, and we figured let's take Adams Ave., which would be a different route and probably more scenic too. It got really scenic only a few blocks in, as I spied a door open to an establishment with available pool tables, and I felt for sure I was close to beerquilibrium for pool. The spot is called The Lancers, evidently been around since the 1970s, and you can play pool for 50 cents per. All the beer is bottled, but what bottles--they had Russian River Pliny the Elder, in its usual bomber, for $7. Heck, I think I pay practically that for it at Whole Foods, if I ever find it at Whole Foods (I'm rarely fast enough). This was great billiards.

The walk wasn't bad, and my dear wife was willing to keep drinking less or not at all, so she got us to our next stop, a very non-Italian location in Little Italy. Craft & Commerce is the kind of place that seems to need a + and not a &--very hiply styled, with recycled wood and exposed elements, and books everywhere and tile and, well, lots of lots. But despite a hankering for cool that could lead to douchery, it instead was plenty comfortable with very pleasant servers, so much so our waiter when we got a table turned out to be the very same guy who took our order back at Tiger! Tiger! hours before. Hi, Anthony! You're great--friendly, attentive, helpful, not pissed we figured out a way to order as little as possible for dinner and still sate ourselves (yep, right there on their front porch). We spent all of $13--total--for food. You see they do these buttermilk biscuits filled with herby, savory goodness, as big as scones but as light as good scones, too. You get some some preserves and a spicy cheese fondue for dipping. This is fine ballast. And then we got and shared the generous Craft salad of heirloom greens, heirloom carrots, pea sprouts, french breakfast radish, in a zippy and wisely not poured on ginger miso dressing.

We were truly full, especially after I had two drinks, Chryss one. We eschewed the punch bowls as we were not "several ladies and gentleman" [sic], but did enjoy both items under both "Shaken & Refreshing" and Stirred & Direct." In the former category we tried a Mexican Fire Drill (jalapeño-infused tequila, pineapple, lime, demerara, smoked salt) and a Giddy Up! (Islay scotch, meletti amaro, orgeat, lemon, angostura bitter), in the latter a DiMaggio (rye whiskey, amaro montenegro, demerara, absinthe). I'm the one with the amaro fetish, especially as a cocktail ingredient--if you want some amazing bass notes, bring the amaro. All three did exactly what they should in perfect proportions; they all became a drink, a new wonderful thing of quality components. Much elegance. And for $11 for chi-chi cocktails, that' practically a bargain, these gouging days.

To finish up, it was time to park the car where we'd be sleeping, and we headed to Pacific Beach. (Thanks Roger and Judy for the fine digs!) PB is an odd place, very much a beach town of smoke shops, tattoo parlors, and too many too young too loud thinking that's too fun, so you really need to pick your spots. One we like is simply called The Tap Room, a hint to its unfrilly charms. Again, very pleasant help who know stuff about the beers and want to know if you like what you're drinking. Chryss enjoyed a refreshing Societe The Publican, a hoppy pale ale (yep, one of those that blurs the lines between PA and IPA, insisting there's no "i" in pale ale). I had two, again, of course: a Taproom Seven Deadly Sins (for their seventh anniversary), an imperial stout made by Modern Times. You could commit many sins in its delicious darkness. And then, after all those sins, I closed with an Alesmith Horny Devil, brilliantly Belgian and a chance for too many puns I will only regret.