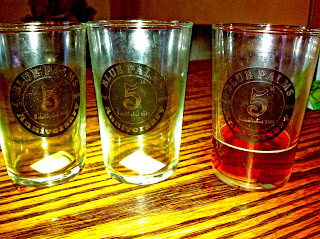 A kid in a candy shop isn't just a cliche, it's pretty much meaningless. Kids have no sense, after all, and if one was let loose at some confectioner he'd probably eat himself sick in the first ten minutes, indiscriminately stuffing his ever-slickening gob with whatever solidified sugar he lay his hands on. It wouldn't be a pretty sight, and it wouldn't be in the dictionary next to restraint.

So a beer festival isn't anything like that, especially one like Blue Palms Brew House's 5th Anniversary, held this past Sunday in Hollywood (so much in Hollywood you had a perfect shot up Gower to the famed hillside sign itself). It was one of those "you get a wristband with little attached tickets, and with each 5 oz. taste, you lose one of them, from 10 to 0" dealies, which might not sound like a lot, but when most of the beers are of the hearty variety in both hopiness and alcohol (this was not a session ale fest in the slightest), you end up not minding too to much. Since Chryss and I were both drinking, that gave us tastes at 20 beers, so that helped, for here's the 20 we did down (in alpha order):

That's one crazy good list. If we had to pick favorites, I'd say that Alesmith Speedway Stout, partially because the unusual Vietnamese coffee made it even more exotic/caffeinated than usual and partially because having it on cask upped its creaminess (it didn't need to be too cold or too carbonated). That Bruery White Chocolate I almost didn't get back from Chryss when she got her sip of it. Here's what the Bruery says about it, to which I can only add, "How balanced!" and "Cowabunga!"--"The primary component of our White Oak ale is a 100% barrel aged wheat wine that we affectionately refer to as White Oak Sap. Essentially a 'summer' barley-wine style ale, but made with a wheat heavy grain base, White Oak Sap is aged in used bourbon barrels for nearly a year and comes out rich in flavors of coconut, honey, caramel and vanilla. To compliment the already rich flavors of the beer, we've added cacao nibs and vanilla beans to give this beer the delicate flavor of white chocolate...hence the name."

As for all those IPAs ans DIPAs--choosing among them is like picking a favorite child and then drinking it and smacking your lips, and no one wants to see that. This is a food blog, mostly, after all.

UPDATE: I forgot to mention the great band at the event, The Firkins, who, as their name might suggest, know a thing or two about drinking. We're talking songs like "Angel's Share" and "Pliny the Younger." Smart, talented, fun!