In the Court of the Master Sommelier Kings 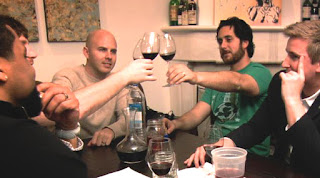 Earning the title Master Sommelier isn't merely some puffed-up honorific -- it's kind of like passing the bar (no pun intended), as fewer than 200 candidates have aced the three-part exam in 40 years. The documentary SOMM, which hits theaters June 21st after a handful of festival and sneak preview screenings, follows a cohort of men (more on that in a bit) prepping for and taking the arduous exam. In the tradition of Spellbound and Kings of Pastry and Air Guitar Nation, SOMM has the thrill of a built-in "who will succeed amongst the obsessive?" narrative thrust that's undeniably gripping. But it's equally fascinating to consider what it reveals about the world of wine and those expert enough to serve it to us at the ritziest of places. You're not going to find a Master Sommelier breaking out his latest value play at the Fish-Meat Village down the block, let's put it that way. No, they end up with titles like United States Ambassador to Krug Champagne.

Want to read the rest then do so at the KCET blog.
Posted by George at 5:30 PM

Email ThisBlogThis!Share to TwitterShare to FacebookShare to Pinterest
Labels: a start and a nudge, KCET, SOMM, wine