I Got Younger and Younger 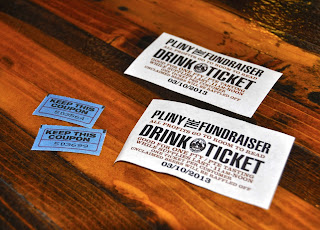 Turns out I blogged too soon, and with another attempt at it, I ended up with a whistle wet with Pliny the Younger after all. The sublime Blind Lady Ale House in San Diego--which exists in the brilliantly named neighborhood Normal Heights (that's a goal for life if anything is)--pre-sells their Pliny allotment. Through Brown Paper Tickets, which doesn't charge too much extra and gives a bit of that back to charity, too. That's where BLAH's profits went also (oh, and they call themselves BLAH even if they're anything but), to a literacy group called Room to Read. So it was all win-win.

Especially when at 6 pm the Friday night the tickets went on sale my purchase sailed (saled?) through flawlessly. That meant we had to be at BLAH Sunday, March 10 between 11 am and 12 noon, get checked off the list, and get our tickets for a .25L glass of Pliny the Younger and a .25L glass of Pliny the Elder. People really seem to be into the mini-flight presentation of Pliny this year. I like people. You can see our tickets at this entry's heading.

We did have a tiny bit of a problem, end-of-the-alphabeters that we are. They really wanted to be sure no one bought multiple drinks for him or herself (it was about 65% guy/35% gal if you were wondering--the cult of hops definitely leans male), so I went back in and changed the name of my wife's ticket to be under her own name. And it seems Y-o, coming after Y-a, also pushed her off the list onto a new page...they forgot to print. So we had a teeny-tiny "don't tell me this is going to go wrong" moment, but they let us both in and BLAH owner Lee Chase himself very kindly helped sort stuff out. As you can tell from the photo, all's well that ends with beer. 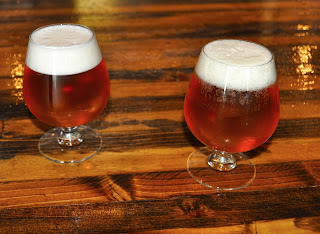 Is Younger worth all the fuss? It is a sublime beer (it's on the right, Elder on the left). Stick your nose over your glass and it seems like you have walked into a pine forest, that much lovely resiny hops hit you. I almost would be happy just sniffing the stuff all day. The taste is the same, rounded with floral notes. Russian River manages the balance impeccably, though, especially for a beer at 11% ABV. It seems nowhere that strong, lacking any alcohol spank at the back of the throat like some double and triple IPAs. Instead, its flavor lingers for a good thirty seconds like a fine wine. I drank it first, the Elder second, and it took the Elder about half the glass to assert itself as the brilliant beer it is; it's kind of like, "Yeah, Kelly Hogan, you sing great, but you need to back-up Neko Case, ok?"

So, is it worth the fuss? Depends upon how much fuss you want in your life, I guess. It's certainly cheaper and easier to get (if you don't mind a drive and some planning) than landing some Screaming Eagle Cab, say.

Even better, in addition to getting the original beer for your $15, you got a raffle ticket. You could buy more tickets for $5, so of course we did (for literacy!). Then they started pulling numbers, and each time the digits got close my Pliny-loving-heart skipped a beat. Keep pulling glasses, I thought. And they did, and did, and perhaps the fifth to last one was one of my tickets. So I got to have it all again. 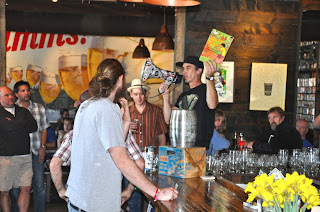 The food's mighty good at BLAH, too, thick cut Belgian style frites with three excellent dipping sauces (all ketchup needs curry, evidently) are particularly useful for soaking up beer. And the pizzas are delightful, very thin crust yet crust with taste, and toppings like Bordeaux spinach. Plus the regular beer list always rocks, too--a Craftsman Cave Art managed to seamlessly blend a smoked beer and a sour, and that was mighty new and delicious.
Posted by George at 8:00 AM